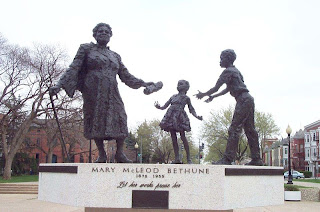 On this day in ...
… 1875, Mary McLeod Bethune, American educator and civil rights leader, was born to former slaves in Mayesville, South Carolina. She established the Daytona Literary and Industrial School for Training Negro Girls in an era when most African-American children received little or no education. In addition, she founded the National Council of Negro Women, which to this day works to improve the quality of life for women and their communities. Bethune was also president of the National Association of Colored Women when it became the first black-controlled organization represented in Washington, D.C. She became a member of the "Black Cabinet" that advised President Franklin D. Roosevelt on issues facing African Americans in America. She was the only African-American woman at the 1945 San Francisco Conference that launched the United Nations. The statue of her above right was the first statue depicting any woman or African American in any park in Washington, D.C. (image credit)
… 1978, Moktar Ould Daddah, President of Mauritania, was ousted in a bloodless coup d'état. In 1975, Daddah had led Mauritania into a long and costly guerrilla war in Western Sahara (prior IntLawGrrls post) against the Polisario Front, an indigenous movement fighting against the Moroccan-Mauritanian attempt to annex the territory. By the end of 1977,

amid economic collapse in Mauritania (in orange at left), Daddah faced growing opposition to the war and to his administration. That set the stage for military takeover on this day, following by Daddah's exile to France a year later.
(Prior July 10 posts are here and here.)
by Jocelyn Wolf at 5:59 AM