On this day in ...
… 1919 (90 years ago today), the Dutch House of Representatives passed the Factories Act of 1919, approving the 8-hour working day and Sunday holiday in the Netherlands (flag left). According to Labour Law in the Netherlands by A. T. J. M. Jacobs,

That act had been the fruit of social turmoil in Europe by the end of the First World War and was the realization of the ambitions of the worker movement for the eight-hour working day and a 45-hour working week…. This legislation also prohibited night work and shift work by women in factories. 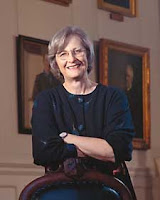 … 1938, Laurel Thatcher Ulrich (right), a Harvard professor who's a pre-eminent historian of early America and the history of women, was born in Sugar City, Idaho. (photo credit) Her major fields of interest are early American social history, women's history, and material culture. She was previously Professor of History at the University of New Hampshire. Her book, A Midwife’s Tale: The Life of Martha Ballard based on her diary, 1785–1812, received the Pulitzer Prize in history in 1991. She is credited with this catchphrase:

Ulrich is the author of many articles and reviews and is the recipient of a MacArthur Foundation Fellowship as well as many other honors and awards.
(Prior July 11 posts are here and here.)
by Jocelyn Wolf at 5:59 AM

This reminds me that there is still no complete English translation of C.G. Schrader's amazing Notebook of a Friesan Midwife (Memoryboeck van de Vrouwens) 1693-1745. A study based on her memoirs, however, does exist in English for those interested in the lives (and deaths) of early modern women: Mother and Child were Saved, parts of which can be read via Google Books