On this day in ...
... 1862, in the middle of the Civil War and half a year before issuance of the Emancipation Proclamation, Ida B. Wells was born to a couple held in slavery in Holly Springs, Mississippi. Ida attended Freedmen's School Shaw University, but dropped out of school and started working as a teacher at age 16 in order to keep her siblings together after their parents and an infant brother died from yellow fever. Eventually she moved to Memphis, Tennessee, where her refusal to sit in the train car designated for blacks gave rise both to a high-profile court case and to her career as a crusading journalist. She became a co-owner and editor of a leading antisegregation newspaper and an investigative reporter who focused on the crime of lynching. She settled in Chicago, where she helped to organize an African-American boycott of the 1893 World's Columbian Exposition, married and raised a family, and worked to improve the lot of the city's ever-growing African-American population. Wells traveled as far as Europe to speak in favor of racial equality before her death in Chicago in 1931. She is an IntLawGrrls transnational foremother, thanks to guest/alumna Lynne Henderson. As posted at Legal History blog, Wells also is the subject of a new biography, Ida: A Sword Among Lions (2008) (above left), by Smith College Professor Paula J. Giddings.
... 1945, about 6 weeks after Nazi Germany's surrender, leaders of 3 victorious Allied states -- 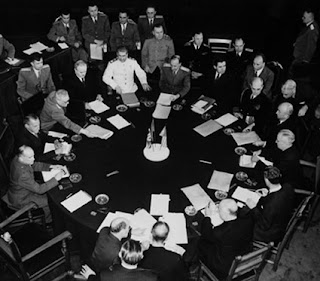 Britain, the United States, and the Soviet Union -- convened at Potsdam "to decide the future of a defeated Germany." Their conference (right) concluded on August 2 with issuance at this city southwest of Berlin of the Potsdam Declaration. It contained not only provisions for the division of Germany into 4 occupied zones, but also a warning, issued on July 26, which warned Japan that if it did not surrender the Allies would resort to

No surrender ensued, and atomic bombs were dropped on Japan on August 6 and 9. (photo credit)
(Prior July 16 posts are here and here.)
by Diane Marie Amann at 12:00 AM