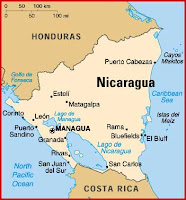 On this day in ...
... 1979 (30 years ago today), Nicaragua's capital of Managua fell to Sandinista rebels. In the words of the BBC, "The notorious US-trained National Guard has crumbled and its surviving commanders are negotiating a surrender." Within days the Sandinistas, who'd long been fighting the government in power, would establish a revolutionary government in the Central American country; they would rule until losing a national election in 1988. (map credit)
... 1954 (55 years ago today), Angela Dorothea Kasner was born in the city of Hamburg in what was then West Germany, to a father who was a Luthern minister and a mother who was a schoolteacher. That sam 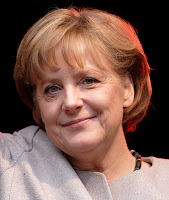 e year the family moved to East Germany, where Angela grew up. She learned to speak fluent Russian in the course of earning a doctorate in physical chemistry. Since 2005 Angela Merkel (right) has served as Germany's 1st woman Chancellor, after having become active in politics during the democracy movement of 1989. Forbes magazine ranks her the #1 most powerful woman in the world.