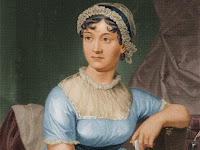 On this day in ...
... 1817, following a long illness now thought to have been Addison's Disease, Jane Austen (right) died at age 41 in Winchester, England, and was buried days later in that city's cathedral. This cleric's daughter began writing as a child. Her most memorable works include the novels Sense and Sensibility (1811) and Pride and Prejudice (1813). She had an incredible talent for crisp characterization and incisive social commentary. No doubt many an IntLawGrrl has not only put herself in the shoes of Austen's plucky heroine Eliza Bennet, but also marveled at Austen herself, who persisted in writing at though few at the time prized women authors. Her tombstone "does not even mention that she was an author."
... 1940, Spanish dictator Francisco Franco claimed for Spain Gibraltar,

long a British outpost though on the Iberian peninsula, "not that he expected the British to give it to him but keep Germany from taking it." Today it's an overseas territory of Britain. (credit for photo of the Rock of Gibraltar)