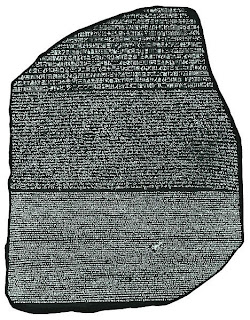 On this day in ...
... 1799 (210 years ago today) , a soldier who'd accompanied French Emperor Napoleon Bonaparte on his campaign in Egypt discovered "a black basalt slab inscribed with ancient writing near the town of Rosetta, about 35 miles north of Alexandria." On it were passages in 3 scripts, Greek, Egyptian hieroglyphics, and Egyptian demotic, "all of identical meaning." The stone thus "held the key to solving the riddle of hieroglyphics, a written language that had been 'dead' for nearly 2,000 years." Seized from the French 2 years later when Napoleon was defeated, this Rosetta Stone (left) has been at London's British Museum for the last 2 centuries. (A prior IntLawGrrls post on Napoleon's Egyptian adventure is here.)
... 64 (1,945 years ago today), fire swept Rome while its Emperor Nero fabulously fiddled. "Fabulously," that is, because a near-contemporaneous account does not put that musical instrument in Nero's hands. Rather, historian Tacitus wrote in his Annals of Imperial Rome:

Now started the most terrible and destructive fire which Rome had ever experienced. It began in the Circus, where it adjoins the Palatine and Caelian hills. ...Fanned by the wind, the conflagration instantly grew and swept

the full length of the Circus. There were no walled mansions or temples, or any other obstructions which could arrest it. ...
... A rumor had spread that, while the city was burning, Nero had gone on his private stage and, comparing modern calamities with ancient, had sung of the destruction of Troy. ... People believed that Nero was ambitious to found a new city to be called after himself.

In an aftermath that future residents of Chicago and San Francisco would find familiar, the charred city was rebuilt to greater glory. And whether Nero liked it or not, it kept its original name of Roma.
(Prior July 19 posts are here and here.)
by Diane Marie Amann at 5:59 AM