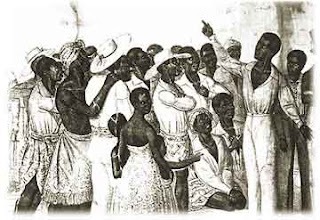 On this day in ...
... 1839 (170 years ago today), more than 4 dozen persons held in slavery revolted 4 days after the ship transporting them, La Amistad, had set sail from Havana, Cuba. Leading the revolt was Sengbe Pieh, or Cinque, as he was called in the United States. A member of Africa's Mende people, he'd been seized and sold into slavery in West Africa in January of the same year. The ship would drift about the Atlantic until August, when, on arrival in New London, Connecticut, the ship, its remaining crew, and the rebellious slaves became the source of an epic legal dispute. As depicted in the film Amistad (1997), former U.S. President John Quincy Adams would argue on behalf of Cinque and comrades (above right) (image credit), resulting in the Supreme Court's favorable 1841 decision.
... 1976, 3 years after the departure of U.S. troops and 1 year after the fall of Saigon, the National Assembly of Vietnam met for the 1st time and officially reunified the country, naming it the Socialist Republic of Vietnam, establishing the capital at Hanoi, and adopting the flag at left. The

Many people who supported the Saigon regime are sent to 're-education camps'. Over the next years more than one million of Vietnamese and ethnic Chinese ('boat people') flee the country.