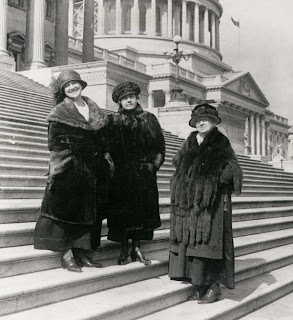 On this day in ...
... 1921, Alice Mary Robertson (near left) became the 1st woman to preside over the U.S. House of Representatives. Having been elected by Oklahoma voters, on March 4 of the same year she'd become the 2d woman ever to serve in Congress (the 1st was Jeannette Rankin, another Republican, about whom we've posted). Of Robertson's politics it's been written:

She opposed feminist groups like the League of Women Voters and the National Women's Party, and voted against bills funding maternity and childcare on the grounds that they were an unwarranted governmental intrusion on personal rights. This earned her the support of the Daughters of the American Revolution, of which she was a member.

(See also Louise Boyd James, “Alice Mary Robertson -- Anti-Feminist Congresswoman,” 55 Chronicles of Oklahoma 454 (Winter 1977-1978).) Robertson served only 1 term, losing her bid for re-election to the incumbent she'd ousted 2 years later. It would not be until the election of Republican Mary Fallin in 2006 that Oklahomans would send another woman to Congress. (credit for 1923 photo of Robertson with 2 later-arriving Representatives, Winnifred Huck (R-Ill.), far left, and Mae Ella Nolan (I-Calif.), center)
... 1940, having been occupied by Nazi Germany in April, Denmark withdrew from the League of Nations.