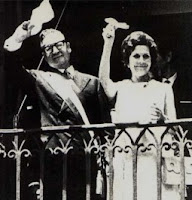 On this day in ...
... 1914 (95 years ago today), Hortensia Bussi was born in Valparaiso, Chile. As a young woman she taught history and geography, then worked at a government statistics institute. In 1939, while volunteering in a campaign to aid earthquake victims, she met Salvador Allende; they married the next year. Allende would run 3 times for President before he was finally elected in 1970. First Lady Bussi, pictured at left with President Allende, became active in social aid programs. But her husband died during the coup of September 11, 1973, which began decades of military rule by Gen. Augusto Pinochet. Exiled in Mexico, Bussi, known as "Tencha," agitated against Pinochet's government; her contribution is recalled in this El Pais essay by writer and human rights activist Ariel Dorfman. Only after civilian rule was restored did she return home in 1990; there she died last month.

... 1937, "in a session as dramatic as any witnessed in the historic chamber in many years," the Senate voted 70-20 against President Franklin D. Roosevelt's plan to change the composition of the U.S. Supreme Court. The vote sent a bill that would have "packed the Court" by adding a new life-tenured Justice whenever an existing Justice became 70-1/2 years old back to committee, never to return again to the full Senate floor. (image credit) A day later Roosevelt would spin the defeat as victory, contending "that its very agitation caused the Supreme Court to reverse its position, and so advanced the country part way toward the original objectives of the bill"; namely, approval of his New Deal programs. FDR's spin was successful, for that is how historians speak of the controversy to this day.