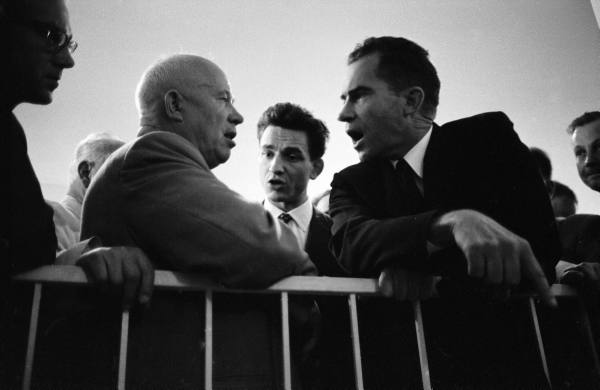 On this day in ...
1959 (50 years ago today), during a visit to an American exhibition in the Soviet Union, U.S. Vice President Richard M. Nixon (near left) got into a tense discussion with Soviet leader Nikita Khrushchev (far left) about the merits of communism versus capitalism; their dispute became known as the "kitchen debate." (photo credit) The exhibition, which mirrored a Soviet exhibit that had taken place in the United States earlier that year, was intended to show Soviets facets of American life, such as homes, fashions, and cars. The discussion became heated after the 2 leaders were shown into the American model kitchen and Nixon said that even the washing machines, toasters, and juicers on display were common purchases American workers could afford, implying that the new gadgets were not readily available in the Soviet Union. Khrushchev replied,

'We have all these things in our new flats."

1920, Bella Abzug (right), American feminist, lawyer and politician, was born in the Bronx, New York. In the 1970s, Abzug served as the representative for the West Side of Manhattan for 3 Congressional terms. On her 1st day as a representative she called for an immediate withdrawal from Vietnam. She fought for national health insurance, money for day care centers, and housing. She cosponsored the Equal Rights Amendment, and she was one of the 1st members of Congress to call for the impeachment of President Richard M. Nixon. In the words of a colleague,

'She was one of the most exciting, enlightened legislators that ever served in the Congress.'

After leaving the House in January 1977, Abzug worked for women's rights for another 20 years, founding an international women's group that worked on environmental issues. She died on March 31, 1998. (photo credit)