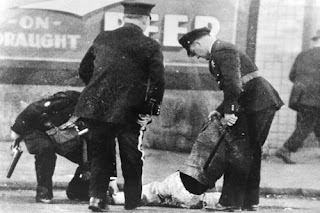 On this day in ...
... 1934 (75 years ago today), on what was known as San Francisco's Bloody Thursday, rioting involving thousands of persons along the waterfront resulted in 3 deaths and a score of injuries. Police clashed with striking union members, and bystanders were caught in the melee as strikers hurled tear gas canisters thrown at them back at police. (photo credit) The governor called out the National Guard on this day, nearly 2 months after labor protests had begun in the city. The day ended with International Longshoremen's Association leader Harry Bridges -- later the victor in immigration and false statements cases before the U.S. Supreme Court -- going to City Hall to protest police actions.

... 1944 (65 years ago today), Leni Björklund (right) was born in Sweden. Following her childhood in the community of Örebro, she earned a bachelor's degree at Uppsala University, and then entered politics. A member of the Social Democratic Party, from 2002 to 2006 Björklund served as Sweden's Minister for Defence -- the 1st woman, and the 1st person who'd not served in the military -- to hold that post.