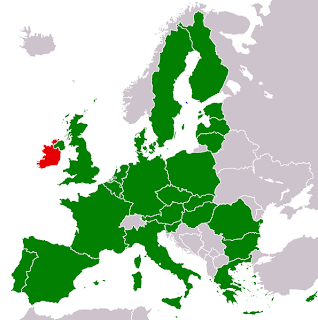 On this day in ...
... 2005, the House of Representatives of Malta unanimously approved a Motion for the Ratification of the European Constitutional Treaty, thus making the Mediterranean island nation the 12th state party to that European Union pact. But as we've posted, the treaty failed to take effect on account of "No" votes in referenda held earlier the same year in France and the Netherlands. As a consequence the EU then shifted, seeking member states' OK of the Lisbon Treaty, an agreement that includes much of its predecessor but eschews any claim to being a Constitution. The future of this treaty too is in doubt, on 2 fronts: 1st, the electorate in Ireland, having received certain new assurances from the EU since its 2008 "No to Lisbon" vote, will stage a do-over referendum in October; and 2d, a national court has just ruled that Germany's ratification is not yet valid. (credit for map at left, prepared before German court ruling, which shows Ireland, in red, as the lone Lisbon Treaty holdout among EU member states, otherwise in green) 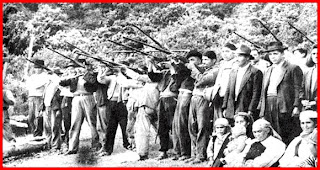 ... 1934 (75 years ago today), amid an uprising (right) that had begun the month before, Chilean troops killed hundreds of campesinos -- the exact number is disputed -- around Fundo Ranquil, an area at the Biobío River near Chile's midpoint. (photo credit) A detailed account, in Spanish, of this unsuccessful movement by the Mapuche people to establish a "República Indígena" is available here.

Once upon a time there was a family treaty-ing themselves to a visit in Lisbon.
On the sunny day that it was they decided to go out together.
Everyone had to agree on what they would do.
"So", said Daddy Brusselsprout "Let's all go for a picnic!"
"No", said Aunt Erin, "I don't want to".
Did they then think of something else, that they might indeed agree on?
Oh yes they did?
Oh no they didn't!
Daddy Brusselsprout asked all the others anyway, isolating Erin, and then asked her if instead, she would like to go with them to the park and eat out of a lunch basket....


Kids, we'll finish this story tomorrow, and remember, in the EU yes means yes and no means yes as well!