On this day in ...
... 1907, Susie Marshall Sharp was born in Rocky Mount, North Carolina. The only woman in her Class of 1929 at the law school of the University of North Carolina, Sharp joined her father's law practice upon graduation. Her appointment as a Superior Court judge in 1949 prompted the following exchange:

... Tom Bost of the Greensboro Daily News questioned 'what would happen if Sharp was faced with trying a case of rape? Wouldn't that be too much for a woman?' Judge Sharp wrote back that 'In the first place, there could have been no rape had not a woman been present, and I consider it eminently fitting that one be in on the "pay-off".'

In 1974 Sharp became the 1st woman chosen by the electorate to serve as Chief Justice of her state's Supreme Court. As IntLawGrrls guest/alumna Mary Dudziak recently posted at her Legal History Blog, the life of this pathbreaking jurist is the subject of the new biography depicted above right, Without Precedent: The Life of Susie Marshall Sharp by attorney/author Anna R. Hayes. Sharp retired from the bench in 1979 and died in 1996. 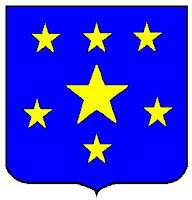 ... 1960, via Resolution 142, the U.N. Security Council unanimously recommended admission as a member state to the United Nations for the country then known as Republic of Congo, with the city then known as Léopoldville as its capital. Both the country and the capital would undergo name changes: today the former is the Democratic Republic of Congo (known as Zaire for an interim period); the latter, Kinshasa. (credit for Congo coat of arms circa 1960)
(Prior July 7 posts are here and here.)
by Diane Marie Amann at 5:59 AM