On "rape as a weapon of war" 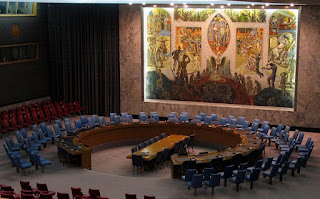 U.N. Security Council Resolution 1820, entitled “Women and peace and security” and adopted on June 19, 2008, can be seen as the culmination of a long effort to have sexual violence against women recognized as instrumental – rather than incidental – to war.
In its very 1st paragraph, Resolution 1820 noted what feminists had been explaining for many years, that rape when enacted as a “tactic” of war “can significantly exacerbate situations of armed conflict and may impede the restoration of international law.” Rape can be a weapon of war, an instrumental part of conflict. As a result it must be addressed as a serious crime and an impediment to peace.

It is this recognition of rape as a ‘weapon of war’ that interests me, and which I explore it in “Rethinking Rape as a Weapon of War”, soon to be published in, and available in full online at, the journal Feminist Legal Studies. Feminist legal academics and activists writing in the early-mid 1990s, argued for recognizing ‘rape as a weapon of war’ as a means to articulate the systematic, pervasive, and orchestrated nature of wartime sexual violence that marked it as integral rather than incidental to war. In this usage, rape as a weapon of war is seen as resulting from and produced through political, social and military contexts.
The recognition of ‘rape as a weapon of war’ appears to have been taken up in numerous legal and policy institutions, from the Security Council (above right) to the war crimes tribunals for Rwanda and the former Yugoslavia. But what happens to the meaning of ‘rape as a weapon of war’ in these legal settings?
In my review of the jurisprudence of the International Criminal Tribunal for Rwanda (up to December 2008), I found that the Chamber’s depiction of rape as an instrument of the genocide constrained both the types of sexual violence and the categories of victims that it was able to see. More profoundly, in the Tribunal’s usage, rape understood as a weapon of war positioned rape as an inevitable – almost ‘natural’ – part of conflicts seen as ‘ethnic’ or ‘nationalist’. Rape became, in effect, an instrument that ‘one side’ picks up and uses against the ‘other side.’
This approach, I argue, assumes that rape is simply always available as a weapon. In this maneuvre, moreover, the Tribunal’s characterization of rape as an instrument of the genocide has the effect opposite to what feminists intended. Considering rape ‘as an instrument of the

genocide’ makes it difficult to ask critical questions; for instance: why the rapes happened; how the rapes might have been connected to various social relations and structures that predated the genocide; and what women did to negotiate and resist sexual violence.

Doris--welcome to IntLawGrrls...I'm delighted to 'see' you here! I look forward to reading this when it's available.