Read On! Justice at Guantánamo by IntLawGrrl Kristine A. Huskey

(Read On! ... occasional posts on writing we're reading) As mentioned in this teaser post last week, IntLawGrrls' own Kristine A. Huskey, aided by Aleigh Acerni, has just published one great book.
The hardcover spine names the book Justice at Guantánamo, and it's surely about that. But a fuller story's evident in the subhead found in the frontispiece, One Woman's Odyssey and Her Crusade for Human Rights.
Kristine does a super job of describing how she came to be among the 1st lawyers representing persons detained at Guantánamo. It started pretty much as a missing persons case: a group of Kuwaitis were worried sick about their sons, who’d disappeared after the onset 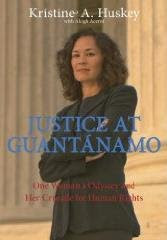 of the U.S.-led counterassault in Afghanistan. Soon Kristine and her team, led by Shearman & Sterling partner Tom Wilner, find themselves ensnared in the tangle of national, international, habeas, and criminal law regimes relevant to post-9/11 detention. The team travels to Kuwait, to court, and, years later, to Guantánamo. Kristine’s opening description of her 1st sojourn there is masterful. Her closing questions about current policy likewise provoke much thought, coming as they do at the end of the very human story she tells.
And that is where the subtitle comes in.
Framing, indeed interweaving, this story of detainee representation is another – the story of how one woman has negotiated the challenges of life and career in our complex society. Kristine’s odyssey begins in bushplane Alaska, moves to a stint as an unwed teenaged hausfrau in wartorn Angola, to a New York City life of fin de siècle hedonism that would have done Jay McInerney proud. In Manhattan Kristine stumbles – the word is not an exaggeration – into undergraduate study at Columbia. That leads to law school at Texas and, eventually, to practice at Shearman.
It’s an improbable journey, and Kristine reveals its elements well. She is the child of a Caucasian bush pilot and a Filipina mother, a family not familiar with Ivy League colleges. She is a fashion model and an honors student, a bartender and a beauty pageant contestant.
She is a feminist too, and her candid telling of that story intrigues. Kristine is a woman and a ’Grrl. She grapples with how to be all that, and an attorney to boot. Her path to a most excellent career includes prickly personal relationships. Her late-in-the-day discovery of her heritage includes a quest to become a Filipina beauty queen – by reciting a Marge Piercy poem. As Kristine remarks (pp. 51-52),

I’m pretty sure I would have at least placed in the pageant if not for these few lines:
A strong woman is a woman in whose head
a voice is repeating, I told you so,
ugly, bad girl, bitch, nag, shrill, witch,
ballbuster, nobody will ever love you back,
why aren’t you feminine, ...

This is a book that everyone embarking on a legal career – not to mention everyone who ought to know more about America’s campaign against terrorism – would do well to read.
Go, ’Grrl!
by Diane Marie Amann at 6:02 AM