The Government of Kenya (flag right) recently announced the nominees for the proposed Truth,

I am delighted to report that our friend and colleague, Ron Slye from Seattle University School of Law (left), is among the foreign nominees to serve on the Commission. Prof Slye served as a legal consultant to the South African Truth and Reconciliation Commission from 1996 to 2000. He is currently writing a book on the South African Truth and Reconciliation Commission and its amnesty process. Ron, who will be the only non-African commissioner, is also an honorary professor at University of Witswatersrand.

By way of background, in the wake of the inter-ethnic violence following the contested elections of December 2007, the African Union’s Panel of Eminent African Personalities (chaired by former U.N. Secretary General Kofi Annan) intervened to negotiate a power sharing relationship between Mwai Kibaki’s Party of National Unity and Raila Odinga’s Orange Democratic Movement. The Panel hosted a series of sessions, called the National Dialogue and Reconciliation, to deliberate on the root causes of the post-election violence. This process resulted in the recommendation that Kenya establish the TJRC to examine human rights abuses committed since independence through February 2008. This long time frame is the result of conclusions that the post-election violence stemmed at least in part from unresolved historical injustices (such as unequal distribution of land) and alleged human rights violations by previous governments. Those found guilty of serious rights violations will not be eligible for amnesty; however, those who committed corruption or other economic crimes for personal gain can apply for amnesty under the legislation. For more details see here and the website of the International Center for Transitional Justice, which has served as a consultant to the government. The Kenyan Parliament passed a final bill to establish the TJRC on October 23, 2008. The Commission will consist of six Kenyans and three foreigners. The latter were identified by the Eminent African Personalities. Nine Kenyans have also been nominated, of which six will be chosen by the government.

A separate Commission of Inquiry on Post-Election Violence, headed by Justice Phillip Waki, recommended the establishment of a special tribunal to prosecute specific individuals responsible for the post-election violence. The commission gave a sealed list of suspected perpetrators to Annan on the understanding that he would forward them to the ICC in the event that Kenya did not move forward with prosecutions.

The proposed tribunal has yet to be established; 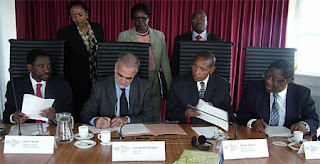 however, a delegation from Kenya met on July 3, 2009 with ICC Prosecutor Luis Moreno-Ocampo (left), who opened his own investigation into the situation in February 2008. The two sides discussed the legal and other steps needed to bring a special tribunal to fruition. In “agreed minutes” of the meeting, the Kenyan delegation pledged that if these steps fail, Kenya will refer the situation to the Prosecutor in accordance with Article 14 of the Rome Statute. This article states:

1. A State Party may refer to the Prosecutor a situation in which one or more crimes within the jurisdiction of the Court appear to have been committed requesting the Prosecutor to investigate the situation for the purpose of determining whether one or more specific persons should be charged with the commission of such crimes.

The delegation also agreed to provide to Ocampo by the end of September 2009 the following:

Last week, it was reported that Annan gave the envelope to the ICC Prosecutor, annoying the Kenyans who claimed they had been blind-sided. Stay tuned…

As a TJRC Commission, Ron joins an august group. The Kenyan appointees have been narrowed to nine individuals, who include:

Bethwel Kiplagat (right), a career diplomat and renowned peace negotiator, expert on conflict management, former permanent secretary in the Ministry of Foreign Affairs (1983-1991), and the special envoy to the Somalia peace talks. He was also the Executive Director of the African Peace Forum and has worked on de-mining and demobilization issues in the horn of Africa. 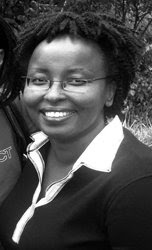 Betty Murungi (left) is co-founder and former executive director of Urgent Action Fund for Women’s Human Rights, which supports innovative and rapid initiatives on women’s leadership in peace building and access to justice in Africa, and an expert on international human rights and transitional justice. Ms. Murungi received the national honour of the Moran of the Order of the Burning Spear in December 2003 for her work in human rights. She is currently an advocate of the High Court of Kenya and has been affiliated with the International Criminal Court, the Truth and Reconciliation Commission in Sierra Leone, the Kenya Human Rights Commission and the East African Centre for Constitutional Development in Uganda. In her words:


My activism is motivated by the resilience and strength of African women who have endured struggles including armed conflicts, exile, disease and impoverishment. Yet through all of this, their spirit remains resilient and renews itself at every turn. They know that women’s rights are human rights. 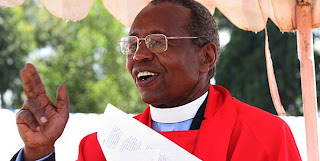 Thomas Letangule is a human rights lawyer who has represented victims of government violence, including lawsuits against retired President Moi, his son Jonathan, and aide Joshua Kulei.

Margaret Shava (left), also a lawyer, is the chairperson of Women in Law and Development in Africa and a peace builder with International Alert, an independent organisation working in over 20 countries and territories around the world.

Abubakar Zein Abubakar has served as the spokesperson of the People’s Commission of Kenya (PCK), a consultation committee under the multi-faith Ufungamano Initiative launched to promote unity following the Kenyan elections.

Tom Ojienda is a former Chair of the Law Society of Kenya and the former East Africa Law Society president. Mr. Ojienda has consulted for the Njonjo and the Ndung’u Land Commissions, which aim to establish more equitable land distribution and rights in Kenya and served on a national task force on HIV and Aids.

The other two foreign appointees are Judge Gertrude Chawatama from Zambia and Berhanu Dinka from Ethiopia (left).

Chawatama, a High Court judge, served on a special commission of inquiry into torture claims made by apparent coup plotters in 1997.

Dinka served as U.N. Special Representative for Burundi and is formerly the Secretary-General’s Special Representative and Regional Humanitarian Adviser for the Great Lakes Region. Dinka was also a former United Nations envoy for his native Ethiopia, but was recalled by Lieut. Col. Mengistu Haile Mariam in the mid-1980’s and immediately imprisoned. He was released in 1989 along with other political prisoners in a deal brokered by the international community.

With this group, some measure of truth, justice and reconciliation in Kenya may actually be possible...
by Beth Van Schaack at 9:44 AM