(Occasional sobering thoughts.) News of civilian casualties in Afghanistan continues. In its Mid-Year Bulletin on the Protection of Civilians in Armed Conflict in Afghanistan, the Human Rights Unit of UNAMA, the United Nations Assistance Mission to Afghanistan, announced that more than 1,000 civilians died between January and June 2009, 24 percent above the number for the same 6 months of 2008. The report faulted both sides of the conflict, which pits forces allied with the government of Afghanistan, including many thousands of NATO troops, against Taliban and other forces opposed to the government; however, it attributed the greater proportion of civilian deaths to the latter side.
The report provoked this comment from Navanethem Pillay (below right), the U.N. High Commissioner for Human Rights:

'All parties involved in this conflict should take all measures to protect civilians, and to ensure the independent investigation of all civilian casualties, as well as justice and remedies for the victims.'

Violence has been high among troops in Afghanistan as well: the just-ended month of July was the deadliest for U.S. troops since the war began in fall 2001. The Pentagon is said to be "preparing a new strategy that calls for major changes," among them "a vast increase in the size of Afghan security forces and an intensified military effort to root out corruption among local government officials," plus "an increase in American troops to implement the new strategy."
Meanwhile, in Iraq, U.S. troops now comprise "'coalition of one,'" down from the 37 countries who went with the United States to war against the regime of then-President Saddam Hussein. Bloodshed continues, although at a pace far slower than in the past, and U.S. military leaders look toward a political solution to problems in post-Saddam Iraq.
With that news in mind, here's the casualty count in the 5 weeks since our last post: 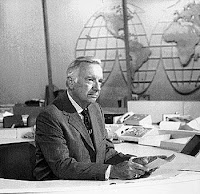 ► Iraq Body Count reports that between 92,519 and 101,006 Iraqi women, children, and men have died in the conflict in Iraq since the U.S.-led invasion in March 2003, representing an increase of between 126 and 138 deaths in the last 5 weeks. According to the U.S. Defense Department, 4,328 American servicemembers have been killed in Iraq. Total coalition fatalities: 4,646 persons. That's 14 servicemember deaths in the last 5 weeks, all of them Americans.
► As for the conflict in Afghanistan, military casualties in Afghanistan stand at 763 Americans and 517 other coalition servicemembers. That's an increase of 51 and 31, respectively, in the last 5 weeks, and a total servicemember casualty count of 1,280.
Finally:
A moment in recognition of last month's passing of newsman Walter Cronkite (above left). The

body count that he reported week after week during the Vietnam War made a lasting memory; indeed, it was the inspiration for this most sobering IntLawGrrls feature.
by Diane Marie Amann at 6:04 AM