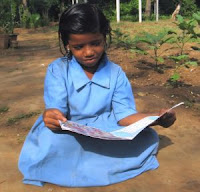 I'm currently at that stage of parenting, familiar I'm sure to many an IntLawGrrl reader, where the only books I have time to read (apart from law books) are children's books. As the parent of a little girl, I had carefully planned my approach to the princess issue and other thorny problems, but here's one that took me completely by surprise: the troubling gender and race dimensions of my favorite childhood books.
Some of these books manifest gender invisibility, illustrated by Sam with his Green Eggs and Ham and Max in Where the Wild Things Are -- all-male books where girls simply don't exist. Women may play the backstage role of mom but the primary, if not the sole focus is on the male character. My head nearly explodes every time I read Hop on Pop's ode to "what a day dad had." What about mom? Sure, she doesn't rhyme with sad and bad, but who's asking about her day? In other children's classics, such as the Babar series, Cat in the Hat and the Velveteen Rabbit (the latter even written by a woman!), the narratives are promulgated by male protagonists, leaving little space for girls and women, who are generally either mute or relegated to traditional female roles -- cooking, cleaning, brushing hair, picking flowers, waving fairy wands. It's no wonder that Sonia Sotomayor and other powerful women such as Hillary Clinton and Ruth Bader Ginsburg cite Nancy Drew as one of their inspirations; at last, a book with a strong, intelligent, and resourceful female 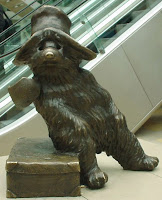 protagonist!
The gender aspects of the books I read to my daughter had been troubling me for some time, and then a dear relative who'd just returned from London brought us a copy of Paddington Bear -- one of my all-time favorites as a child. I'd not remembered that Paddington arrived as a stowaway from "Darkest Peru" and that the British family who takes him in re-names him because nobody can understand his Peruvian name. Paddington, who has never seen a bathroom before, notes that friendly London is not a bit like "Darkest Peru" -- home of the Inca Empire and Machu Picchu, where civilization flourished as early as 3000 B.C. The neocolonialist hubris almost makes you want to laugh; that is, if you weren't reading it to your impressionable child.
Of course, these days there are numerous books to choose from with strong minority and female role models, from the beautiful Grandfather's Journey to my daughter's favorite, D.W., who plays soccer and reads precociously, to The Family Book, which gently promotes diversity in sexual orientation and ethnicity. At the same time, I'd like to share with her the stories that I adored as a child, and certainly don't want to deprive her of the books that she's come to love. Perhaps the answer is to balance these troubling classics with children's books that offer strong female and minority characters and themes. I welcome readers' suggestions of their favorites!

Hi -- I'm not sure if I know of any strong girls with an international theme books (although my daughters' schoolteacher in Kinshasa did write some wonderful children's books about Africa). Do you know Princess Knight? The Paper Bag Princess? I seem to remember that in Mike Mulligan and his Steam Shovel, the Steam Shovel is named "Mary Anne."

Naomi -- not on behalf of WILIG [without Ruthanne]

Thanks, Naomi! My 9-year-old niece loves Princess Knight; that's a great suggestion. I look forward to checking out the others as well, and will try to steer clear of Curious George ;-).

Jaya, I don't have children but a few years ago I embarked on a second childhood of sorts : ) I discovered children's versions of old Haitian folktales my Mother and Grandmother used to recount. And I also bought some of the books I loved as a child. The Haitian tales had the advantage of featuring animals and inanimate objects come to life. I love it! And the American tales I loved also featured animals-The Hare & Tortoise or trains (I'm looking at a version of The Little Engine That Could as I write this). Even as a kid, I was being groomed for grrrldom!

Thanks, Marjorie! Those Haitian folktales sound great! I'll see if I can hunt them down as well . . .

When she is older, she'll enjoy the American Girl series - the protaganists are female and often chafe against expectations of what it means to be a "good girl" of their time. Each makes her own decisions - some good, soem bad - and each deals with the consequences. Each is set in an historical setting that is reflective of the times, but there are elements of subversion and rebellion throughout you can highlight. Love to little Kaya!!!