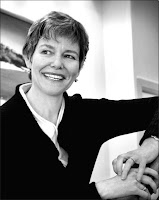 It is IntLawGrrls' immense honor to welcome Hilary Charlesworth (right) as today's guest blogger.
A foremost scholar in international and human rights law, Hilary, about whom we've frequently posted, is an Australian Research Council Federation Fellow, Professor in RegNet and Director of the Centre for International Governance and Justice, Australian National University. She also holds an appointment as Professor of International Law and Human Rights in the ANU College of Law.
She has held visiting appointments at the law schools at Harvard, Washington & Lee, New York University, the University of Oregon, Université de Paris 1 (Panthéon-Sorbonne, and UCLA. She was also the 2005 Sir Ninian Stephen Fellow at the Asia-Pacific Centre for Military Law at the Law Faculty, University of Melbourne.
Inaugural President from 1997 to 2001 of the Australian and New Zealand Society of International Law, Hilary served as a Co-Editor of the Australian Yearbook of International Law from 1996 to 2006 and a member of the Board of Editors of the American Journal of International Law from 1999 to 2009. She has worked with various nongovernmental human rights organisations on ways to implement international human rights standards, and was Chair of the Australian Capital Territory Government's inquiry into an ACT bill of rights, which resulted in the adoption of the ACT Human Rights Act 2004. She is Patron of the ACT Women's Legal Service, the Victorian Foundation for Survivors of Torture and Lawyers Without Borders.
In 2006 Hilary, along with London School of Economics Professor Christine Chinkin, received the American Society of 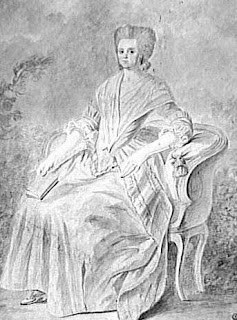 International Law award for outstanding contributions to the development of international human rights law: the Goler T. Butcher Medal, whose namesake is an IntLawGrrls foremother.
For her own foremother, Hilary has chosen to share with IntLawGrrl Hélène Ruiz Fabri the 18th C. feminist and slavery abolitionist writer Marie Gouze, known as Olympe de Gouges (right).
In 1793, 45 years after she'd been born to a washerwoman mother and butcher father, Gouges died beneath the guillotine. Among her most famous works was the 1791 Déclaration des droits de la femme et de la citoyenne, which IntLawGrrls excerpted on a recent Bastille Day. Gouges also theorized the paradox of feminism; Hilary's guest post below considers that concept in this 30th year since U.N. adoption of a multilateral women's rights treaty.

As a female Australian international lawyer, I'm glad that Professor Charlesworth has been welcomed to IntLawGrrls as a guest blogger. I've followed her work in human rights law, particularly in relation to the development of a national human rights framework for Australia. She is one of the few role models in Australia for women working in international law.