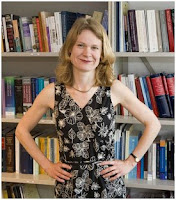 It's IntLawGrrls' great pleasure to welcome Dr. Larissa van den Herik (left) (photo credit) as today's guest blogger.
Larissa's an Associate Professor of Public International Law on the Faculty of Law at the University of Leiden in the Netherlands, where she also serves as Editor-in-Chief of the Leiden Journal of International Law. She has previously worked at the Vrije Universiteit Amsterdam, where she defended her Ph.D. thesis, published in 2005 as The Contribution of the Rwanda Tribunal to the Development of International Law. She was awarded the Bulthuis Van Oosternieland Prize for this academic work. In 2007, Larissa received a 3-year grant from the Netherlands Organization for Scientific Research to do research on the responsibility of corporations and individual businessmen, with respect to illegal trade, during times of armed conflict.
In addition to her work at the Leiden Journal, Larissa is a member of the Editorial Board of Internationale Spectator, a commentator of the Dutch International Crimes Act, and annotator for the International Law in Domestic Courts Project, a joint undertaking of the Oxford University Press and the University of Amsterdam. Her publications include several articles and casenotes in the fields of public international law, international criminal law and the law on peace and security. Her guest contribution serves as a timely complement to last week's post by Valerie Oosterveld regarding the trial of former Liberian President Charles Taylor: in her post below, Larissa analyzes a recent case in which the Dutch justice system eventually acquitted a Dutch national accused of illegally trading arms to fuel Liberia's civil war. Larissa's post is based on her article published earlier this year in the International Criminal Law Review, a 9-year-old journal on whose board of editors yours truly is proud to serve. ICLR the brainchild of its Editor-in-Chief, Dr. Michael Bohlander, formerly a judge in Germany and a Senior Legal Officer of a Trial Chamber of the International Criminal Tribunal for the Former Yugoslavia, and now Professor at England's Durham Law School.
Larissa dedicates her post to Hannah Arendt (below right) (photo credit). Of this philosopher and commentator on international criminal justice, about whom we've posted in the past, Larissa writes:

Nowadays her observations on the banality of evil are more well-accepted, but she had the wisdom to coin the term and the audaciousness to share her brilliant but also disturbing thoughts with the public. Equally her insight

that the Holocaust explodes the limits of the law should ensure that we, lawyers, remain modest and that we realise that ultimately, law with all its technicalities is quite inadequate as a means to fully and comprehensively come to terms with collective crimes, such as genocide and crimes against humanity (even though it may at times be the best of all options).

Arendt joins other IntLawGrrls in the foremothers' list just below our "visiting from ..." map at right.
Heartfelt welcome!
by Diane Marie Amann at 6:03 AM