(In passing marks the memory of a person featured in IntLawGrrls) In Manila yesterday, Corazon Aquino died from cancer at age 76. Noting her role in a milestone event on February 25, 1986, we posted a while back: 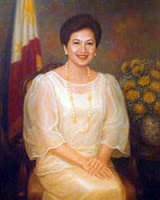 Corazon Aquino (left) was sworn in as the 1st woman President of the Philippines. The move culminated what was called the People Power Revolution, which sent into Hawaiian exile longtime dictator Ferdinand Marcos. He'd threatened to stage a ceremony swearing himself back into power; he changed course, however, after the United States withdrew its support of him. Aquino, who had entered politics after the 1983 killing of her husband Benigno, a dissident leader, held office until 1992.

The tenure of Asia's 1st woman President was difficult, as detailed in her obituary -- not in the least because of the 6 coup attempts she withstood in as many years. Nonetheless, the person who posted this video clip of her swearing-in called it among "proudest moments in Philippine history." Also worth a look: this video clip of her calling for Marcos' resignation. For her role in returning democracy to the Philippines -- a country that had been subjected to Marcos' dictatorial rule for 2 decades -- she will not soon be forgotten.
by Diane Marie Amann at 6:01 AM

Ridiculed by Marcos for her lack of experience, the widow of Benigno Aquino replied:

"It is true. I have no experience in lying, cheating, stealing and killing. I offer you honesty and sincerity in leadership."

She wasn't perfect, but she was good enough for history. May she rest in peace.