A Luta Continua! The struggle for gender justice in East Timor 10 years after the independence ballot

One of the bravest but least known acts during the East Timorese resistance to Indonesian occupation occurred in November 1998, when over 20 Timorese women told their stories of surviving sexual violence to crowds of hundreds at a public meeting in Dili. The stories were collated into a 1999 book called Buibere, which means ‘woman’ in Mumbai, the second most common Timorese language after Tetum. It was written only in English, published in Australia, and intended as an advocacy document for the international community. The persecution, as described first-hand in these collected 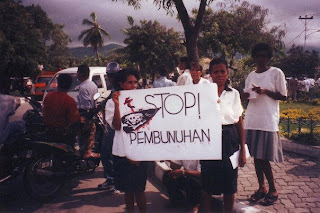 testimonies, was intense, and included rape, torture and other inhumane acts.
Today marks the tenth anniversary of the popular consultation held in Indonesian-occupied East Timor on 30 August 1999. On 4 September 1999, it was announced that 78.5% of the population had voted against East Timor remaining as part of Indonesia, despite intimidation and full knowledge of the likely reprisal. Independence was granted to the territory after 25 years of brutal invasion. The announcement of the ballot result on 4 September 1999 resulted in immediate acts of violence, a scorched earth policy, looting, massive evacuations, and forced deportation of the population. In the months surrounding the 1999 vote, pro-Jakarta militias killed an estimated 1,400 people, burned towns to the ground, destroyed 80% of the territory's infrastructure, and forced or led more than a quarter of a million villagers into Indonesian-ruled West Timor.
In November 2001, in an independent East Timor controlled by a UN mission, the local women’s rights nongovernmental organization, FOKUPERS, released a second version of Buibere, in Tetum, at a public event, with many of the women who contributed stories to the book present. The second edition is intended to formally respect and honour both the contribution of East Timorese women to independence and the high price they paid during the Indonesian occupation.
Some of the problems that continue to face the women of East Timor were graphically outlined by advocate Sister Maria de Lourdes Martins Cruz at the launch:
‘A luta continua!’ she said, and described how the women of East Timor were still second-class citizens in their own land. ‘A luta continua!’ and she described how girls still don’t receive the same educational or employment opportunities as men. ‘A luta continua!’ and she told of domestic violence still rampant, women still serving as slaves in their own homes, women bought and sold like commodities under the tradition of bride price, and men leaders still unwilling to accept East Timorese women as equals. Ovation after ovation shook the hall.
Given the serious nature of the crimes outlined in Buibere, Sister Lourdes’ speech is striking in that in the eyes of those survivors present that day, independence did not necessarily mark the end of violence against women, but rather just a new manifestation of violence and subordination. (credit for 1998 photo by Jude Conway of demonstration in Dili challenging violence against women; the sign says "STOP Murder!")
I contend that Sister Maria was correct in stating that the problems facing Timorese women in the independence period are linked to the problems women faced during the occupation. Recognition and redress under the law for gender-based violence in war is linked to recognition and redress for domestic violence and socio-economic rights in the ‘peace’.
The danger for East Timorese women now is what I term the ‘changing the curtains’ phenomena — that fundamental changes in the sovereignty of the State in the form of independence may mean that the basic conditions of women’s lives, or their potential to claim their legal rights, does not change in any meaningful sense, as described in the call to arms by Sister Lourdes. Despite some important efforts to include women and their experiences in the justice mechanisms established in East Timor since 1999, Timorese women such as Sister Maria may indeed have cause to be disenchanted.
This then raises the crucial question — transitional justice rests on the assumption that there has been a transition from a state of conflict to a state of peace, however uneasy. If women are still experiencing serious levels of domestic violence and economic deprivation, commensurate with their experience of violence during the 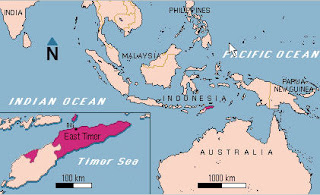 proclaimed conflict, have they entered a state of transition at all? If we ask the question — transition to what? — then the next logical question is therefore — justice for whom?
(See further: CAVR Final Report Chega!, and Independent women. The story of women’s activism in East Timor, by Irena Cristalis and Catherine Scott.)
by Susan Harris Rimmer at 6:03 AM