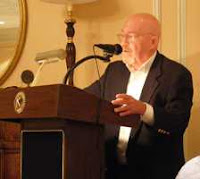 -- William Calley, his "voice start[ing] to break," as he addressed the Kiwanis Club of Greater Columbus, Ohio, earlier this week (above right). Calley was the only person tried and convicted, at a court martial, of premeditated murder in connection with the 1968 My Lai Massacre. The massacre occurred when he was a 24-year-old lieutenant in the U.S. Army (above left); hundreds of unarmed Vietnamese children, women, and men perished. Calley was released in 1974, but, as he said this week, has not had his civil rights restored.
by Diane Marie Amann at 6:05 AM