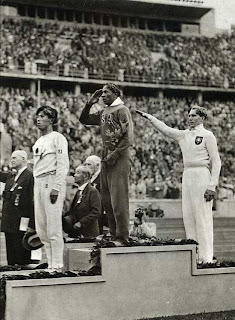 On this day in ...
... 1936, a New York Times headline reported: "100,000 Hail Hitler; U.S. Athletes Avoid Nazi Salute to Him." The occasion was the opening of the Olympic Games in "the world's newest and biggest stadium," in Berlin, Germany. By 1936 Adolf Hitler had consolidated power in Germany; World War II loomed. These Games remain famous because it was there that, as we've posted, African-American athlete Jesse Owens "would win 4 gold medals, and so give the lie to the master-race theories of" Hitler. The incredible photo at right(credit) -- showing Owens on the winner's stand, in front of a medalist giving the Nazi salute -- says it all.
... 1946, Dr. Fiona Stanley (below left) was born in Sydney, Australia. On account of her father's work as a medical researcher, she met Dr. Jonas Salk, who'd developed a polio vaccine, and stories about scientists' accomplishments were favorites throughout her childhood. She received a degree in medicine from the University of Western Australia in 1970. Her 1st work, with aboriginal children, led to lifelong interests in epidemiology and public health, areas she studied in Britain and the United States before returning home. Since the late 1970s she's been a leader in children's health issues in Australia, 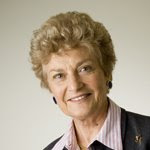 serving as founding director of the Telethon Institute for Child Health Research, as a professor at the School of Paediatrics and Child Health at University of Western Australia, as chair of Australian Research Alliance for Children and Youth, and as UNICEF's Australian Ambassador for Early Childhood Development. Stanley was named Australian of the Year in 2003.