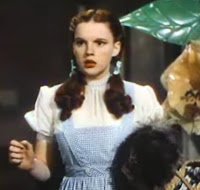 On this day in ...
... 1939 (70 years ago today), The Wizard of Oz premiered at the Grauman's Chinese Theatre in Hollywood, California. This IntLawGrrl grew up loving the movie as a perennial Easter TV treat -- and did not discover till her college arthouse days that halfway through, Dorothy's adventure switches from B&W to amazing "Over the Rainbow" Technicolor! (credit for photo, from film's trailer, of Judy Garland playing Dorothy) 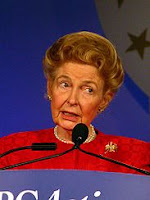 ... 1924 (85 years ago today), Phyllis McAlpin Stewart was born in St. Louis, Missouri. She went to Catholic schools, worked as a model, and earned a master's degree from Radcliffe and her bachelor's and law degrees from Washington University. Best known by the name she took after marriage, Phyllis Schlafly (left) has been involved in politics since her 1st unsuccessful run for Congress in 1952. By 1964 she was a Barry Goldwater devotee, and has since remained a vocal member of the conservative wing, as this list of her recent columns shows.