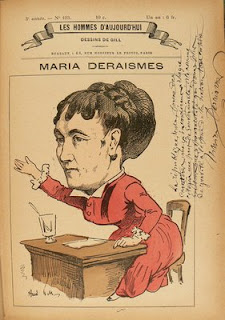 On this day in ...
... 1828, Maria Deraismes was born in Paris, France. She grew up in a family attuned to skepticism and republicanism in that post-revolutionary era. Deraismes became a noted writer and lecturer, speaking out in particular against misogynist writers of her day. She contributed frequently to the journal Le Droit des femmes, and in 1870 helped to form L’Association pour le droit des femmes, the first women's rights organisation in France. She became an advocate of women’s suffrage, "allowing herself to be proposed as a symbolic candidate in the elections of 1885." Deraismes died in 1894, and her complete writings were published a year later. (credit for contemporary caricature)
... 1969 (40 years ago today), a 3-day rock festival at a farm in upstate New York -- Woodstock (below) (photo credit) -- came to an end, and the 400,000 or so who'd camped there began going home. The BBC reported:

Rainstorms failed to dampen the spirits of the revellers, many high on marijuana, some dancing naked in the now muddy fields.