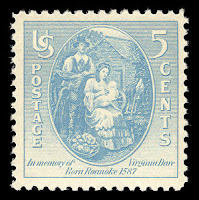 On this day in ...
... 1587, days after her family had arrived with other colonists at Roanoke Island on the mid-Atlantic coast (now North Carolina), Virginia Dare, the 1st child of English descent, was born in what is now the United States of America. The Roanoke Colony vanished, however, and Virginia along with it, under conditions unknown to this day. (credit for 1937 stamp commemorating Dare's birth)
... 1992, during an international inspection of 2 detention sites, the leader of the delegation, Dr. Bernard Kouchner, then France's Humanitarian Affairs Minister (today, its Foreign Minister), called the Serbian detention camps "'hell on earth.'" by the man leading a delegation to inspect them. The visit came a week after TV crews at the Trnopolje camp broadcast "[i]mages of severely emaciated internees

behind barbed wire fences" that led "to comparisons with the horrors of Nazi concentration camps." Abuse at camps would be the subject of numerous cases at the International Criminal Tribunal for the former Yugoslavia, established the following year by the U.N. Security Council.