On this day in ...
... 1919 (90 years ago today), Afghanistan won independence from Britain, which had taken control of the Central Asian country in a 19th C. effort -- which British imperialists called "The Great Game" -- to buffer itself from Russia. Precipitating the handover was the 3d Anglo-Afghan war, on account of which "the war-weary British relinquished their control over Afghan foreign affairs by signing the Treaty of Rawalpindi." (credit for Afghanistan flag circa 1919-1928) 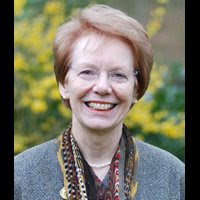 ... 1940, Dr. Hanna Beate Schöpp-Schilling (left) was born in Duisburg, Germany. Following education at the Free University of Berlin, the University of Munich, and Yale, she held academic appointments in American literature and culture at the 1st of those universities, then worked at several research institutes; she is now a consultant and author focusing on women's and children's issues, labor markets, and human rights. Since 1989 Schöpp-Schilling has served as a member of the Committee on the Elimination of Discrimination Against Women, serving from 2001-2004 as Vice Chair of the Committee, which monitors compliance with the similarly named international convention.

Sadly, Hanna Beate Schöpp-Schilling passed away just over a month ago. Here is a message IRWAW sent in July:

Many of you knew her as a distinguished member of the CEDAW Committee. A champion of women's human rights, Dr. Schöpp-Schilling was instrumental in the expansion of the conceptual understanding and scope of application of the Convention on the Elimination of All Forms of Discrimination against Women. As a Committee member, she was very welcoming of NGOs, mindful that
the participation of all stakeholders could only strengthen the review process.

Her voice and presence will be dearly missed.

Condolences may be sent care of her family at:
Ziegeleiweg 4
D-21521 Wohltorf
Germany