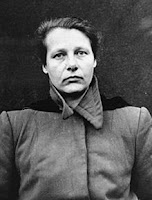 On this day in ...
... 1947, following nearly "140 days of proceedings, including the testimony of 85 witnesses and the submission of almost 1,500 documents," U.S. military judges announced their judgment in the Doctors' Trial at Nuremberg. Sixteen of the 23 defendants were convicted on charges related both to the systematic killing of persons deemed unfit on account of mental or physical impairments and to the ghoulish medical experiments conducted on concentration camp detainees. Of the 16 convicted, 7 were sentenced to death on this day and executed on June 2, 1948. To the lone woman defendant, Herta Oberheuser (above left), a physician who conducted experiments at the Ravensbrück camp, the judgment directed these words:

HERTA OBERHEUSER, Military Tribunal I has found and adjudged you guilty of war crimes and crimes against humanity, as charged under the indictment heretofore filed against you. For your said crimes on which you have been and now stand convicted Military Tribunal I sentences you, Herta Oberheuser, to imprisonment for a term of twenty years, to be served at such prison or prisons, or other appropriate place of confinement, as shall be determined by competent authority.

As posted in our Women at Nuremberg series -- to be reprised later this month during the 3d Annual International Humanitarian Law Dialogs of which IntLawGrrls is a proud cosponsor -- Oberheuser would be released from prison in 1952 and would try to resume the practice of medicine, but would lose her license on account of camp survivors' protests. (photo credit) She died in 1978. 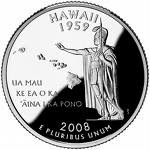 ... 1818, according to Spanish WikiPedia, Kamehameha I, the King of Hawaii depicted on the U.S. quarter at right, signed a treaty which included a provision by which Hawaii "became the 1st country to recognize the independence of the Provincias Unidas del Río de la Plata," another name for the country today better known as Argentina. The entry serves as a reminder of Hawaii's former status -- about which we've previously posted here, here, and here -- as a sovereign subject of international law.