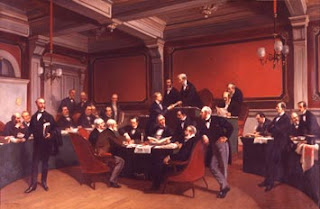 On this day in ...
... 1864 (145 years ago today), a 2-week conference among 16 nation-states in Geneva, Switzerland, concluded with the adoption of the Convention for the Amelioration of the Condition of the Wounded in Armies in the Field. (credit for painting of 1864 signing by Armand Dumaresq, © Photothèque ICRC) As detailed by the nongovernmental organization charging with monitoring compliance, the International Committee of the Red Cross, this 1st Geneva Convention included the following principles:

► relief to the wounded without any distinction as to nationality;
► neutrality (inviolability) of medical personnel and medical establishments and units; and
► the distinctive sign of the red cross on a white ground.

This treaty, which entered into force on June 22, 1865, "ceased to have effect only in 1966 when the last state party to it which had not yet acceded to a later Convention (Republic of Korea) acceded to the Conventions of 1949."

... 1904 (105 years ago today), Kate Chopin (right) died at age 53 of a brain hemorrhage in St. Louis, Missouri, the same city where she'd been born Katherine O'Flaherty to a father who'd emigrated from Ireland and a mother of French ancestry. According to this website,

Kate grew up speaking both French and English at home. She was not only bilingual but bicultural, and the influence of French life and literature on her thinking is noticeable throughout her fiction.

She married in 1870 and moved to Louisiana, where she and her husband had 6 children in the dozen years before he died from malaria. She returned to St. Louis and began to write, publishing stories in periodicals like Vogue and Atlantic Monthly. Chopin is best known for The Awakening (1899), her proto-feminist novel about a Louisiana woman. Written in English, it's since been translated into many languages, including French, Dutch, Portuguese, Czech, Korean, and Polish.
(Prior August 22 posts are here and here.)
by Diane Marie Amann at 5:59 AM