On this day in ...
... 1934 (75 years ago today), Lise Bacon (left) was born in Valleyfield, Beauharnois County, Quebec, Canada. (photo credit) After studying humanities and social sciences, she worked in the insurance industry before and after her 1977-79 service as a Canadian Citizenship Court Judge. Bacon also served as an officer in organizations focusing on women's and children's issues. In 1973 she was elected a member of the Quebec National Assembly, and headed a number of ministries before retiring from provincial politics in 1994. That year she was appointed to the Senate of Canada, a post she continues to hold. Bacon, a member of Canada's Liberal Party, has been an official representative on missions in Africa, Europe, Asia, North America, and Australia.
... 1997, a German national court in Berlin sentenced Egon Krenz, former leader of East Germany, to 6-1/2 years in prison following his conviction 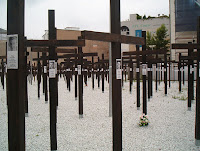 on charges of incitement to manslaughter for instigating a shoot-to-kill policy employed by border guards against people trying to escape to West Germany via the Berlin Wall. His appeals and his application to the European Court of Human Rights were rejected. He would enter prison in 2000 and be released in 2004. (credit for circa 2004 photo of memorial to persons killed trying to cross into West Germany)