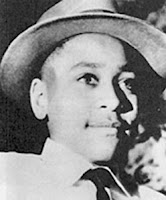 On this day in ...
... 1955, at 2 in the morning, a 14-year-old Chicagoan named Emmett Till was kidnapped at gunpoint from his great-uncle’s cabin in Money, Mississippi. Three days later his body would be found floating in the Tallahatchie River; he was so disfigured that he was identified by the ring on his finger, which once belonged to his late father. Two white men -- relatives of a woman to whom Till (left) was supposed to have paid attention at a country store -- were tried and acquitted for the murderous attack. Nonetheless, as stated on the National Public Radio website dedicated to the case:

The murder and the trial horrified the nation and the world. Till's death was a spark that helped mobilize the civil rights movement.

Till's name has been in the news this summer: 4 workers at Burr Oak Cemetery, the suburban Chicago graveyard where Till is buried, have been indicted for digging up some graves and reselling the plots. Till's family has just donated his original casket to the Smithsonian.