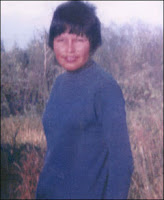 On this day in ...
... 1991, as detailed in this Canadian Broadcasting Co. clip, "two judges have filed their report on Manitoba's Aboriginal Justice Inquiry" (logo below left). Based on 3 years' testimony from "a thousand witnesses," the report detailed how the justice system discriminated against aboriginal Canadians, and recommended that they "have their own police forces and courts if they're to have any chance of fair treatment." Among the cases that spurred the inquiry was that of a 19-year-old

Cree woman named Helen Betty Osborne (right); the AJI's final report issued in 1999 would devote an entire section to her. As reported by the CBC, Osbourne "was raped and stabbed to death by four white men in 1971. But a conspiracy of silence in the town where it happened meant it took 16 years to bring anyone to justice." (photo credit; logo credit)
(Prior August 29 posts are here and here.)
by Diane Marie Amann at 5:59 AM