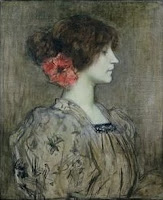 On this day in ...
... 1954 (55 years ago today), the French novelist known solely by her surname, Colette (left), died in Paris. She'd been born Sidonie Gabrielle Claudine Colette 81 years earlier in born in the province of Burgundy. When she was 20 she'd married a writer and music critic -- 15 years older than she -- who went on to publish Colette's 1st novels under his name. The couple divorced, and Colette supported herself by dancing in music halls and writing. Many of her novels, many featuring a strong woman character, remain popular to this day; for instance, the Claudine series (1900-1903), Chéri (1920) (subject of a new film), and La Fin de Chéri (1926). "During World War I Colette converted her husband's St. Malo estate into a hospital for the wounded." In 1920 she was made a Chevalier of the Légion d'honneur; in 1953, a Grand officier. France gave her a state funeral notwithstanding that the Roman Catholic Church because, by the time of her death, she was a 3-time divorcée. (credit for 1896 portrait of Colette by Jacques Humbert)

... 1989 (20 years ago today), then 54-year-old Ali Akhbar Hashemi-Rafsanjani sworn in as Iran's President. He would serve till 1997, then lose a re-election bid in 2005. He remains an influential politician in Iran. Last month, according to Reuters, Rafsanjani (right) said of the controversy since the disputed June re-election of his rival, President Mahmoud Ahmedinejad (prior posts here and here), there was "'bitterness,'" but no "power struggle in the Islamic state."