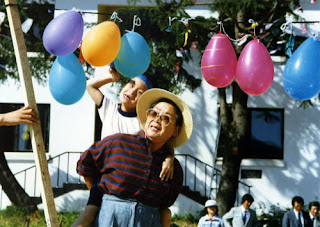 On this day in ...
... 1989 (20 years ago today), the 1989 Ramon Magsaysay Award for Community Leadership was given to Kim Im-soon (right). Born in Sanjoo, Korea, in her 20s Kim fled to Koje Island after her husband vanished during the Korean War. (photo credit) There Kim founded an orphanage and other social service institutions, work that prompted this award that, as we've posted, is known colloquially as an Asian Nobel Prize. The foundation that honored Kim wrote that she

has energized community life on all of Koje. She has helped aid-giving organizations find the neediest groups and individuals and led in founding Koje-do Christian Hospital. She has taught local villagers about family planning, helped organize a credit union benefiting thousands, and opened a library for children. Recently she established the Koje branch of the Korean Legal Aid Center for Family Relations. KIM's good works have inspired others to follow her lead, one reason why her grateful neighbors call her the 'Queen of Koje Island.'