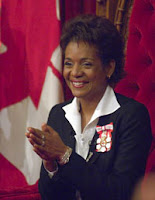 On this day in ...
... 2005, Canada's Prime Minister, Paul Martin, announced his decision to appoint Michaëlle Jean as Canada's Governor General, effective Oct. 1. Then 48, the Haitian-born journalist was "one of the youngest governors general ever, the third woman in the job and the first black person" to serve as the represent[ative to] the Crown in Canada, thus carry[ing] out the duties of head of State." The appointment of Jean (right) would prove controversial; among other things, it was alleged that she once "might have cavorted with separatists in Quebec." To try to defuse this, she gave up her French citizenship. Last month, a columnist at Toronto's Globe and Mail celebrated her as "[b]ilingual, multicultural, modern and worldly," and another writer urged her to run for Prime Minister. (photo credit)

... 2006, the Lord's Resistance Army declared an immediate and unilateral ceasefire, a week before peace talks with the Government of Uganda were set to begin in Juba, Sudan. The New York Times reported that the rebel group "called on the government to lay down its arms," but that the government's head diplomat "said the government would wait to see what happened in the talks, to which the rebels have refused to send their top leaders, who are wanted by the International Criminal Court" (logo at left). As it stands today with respect to the ICC's situation in Uganda, arrest warrants have been issued against 5 persons; 1 has died, and "[t]he four remaining suspects are still at large."