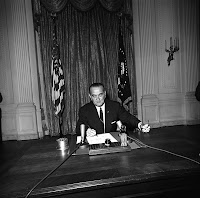 On this day in ...
... 1964 (45 years ago today), Congress voted in favor of a resolution that President Lyndon B. Johnson had requested as a means "to strengthen his hand in dealing with Communist aggression in Southeast Asia." This Gulf of Tonkin Resolution, which gave "prior Congressional approval of 'all necessary measures' that the President may take 'to repel any armed attack' against United States forces and 'to prevent further aggression,'" passed the House of Representatives 416-0 and the Senate 88-2. Decades later serious questions would be revealed about the incident that had supposedly triggered the need for the resolution, an attack on U.S. ships in the gulf off Vietnam. (credit for photo of Johnson signing resolution 3 days after Congress' vote) 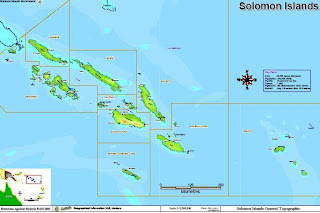 ... 1942, amid World War II, 11,000 U.S. Marines landed at Guadalcanal, one of the Solomon Islands (right), then under Japanese control, and took over the airfield. A bloody jungle battle would ensue, leaving thousands dead before Japan retreated in February 1943.