(My thanks to IntLawGrrls for this opportunity to contribute this guest post)
As a graduate student studying international relations, I watched Japan’s wartime atrocities haunt its foreign affairs. Koreans and Chinese fumed when a Japanese leader visited a controversial war shrine (below right), when a new history textbook glossed over past events, or when a Japanese official blurted out a denial of a past atrocity. In contrast, I noticed that Germany had offered remarkable contrition for its past atrocities and aggression, and also had successfully reconciled with its wartime adversaries. I decided to write a book showing that countries needed to apologize and otherwise remember past violence before international reconciliation was possible.
Well, as I doubt I have to tell the savvy 'Grrls of this blog, things don’t always work out as planned. I didn’t write that book.
Examining the cases of South Korean relations with Japan and French relations with Germany, my book, Sorry States: Apologies in International Politics (2008), shows that denials of past atrocities fuel distrust and inhibit international reconciliation. Japan’s denials damage its 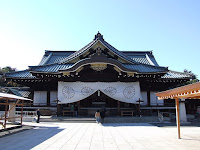 relations with South Korea, China, and Australia, more than sixty years after the war. In contrast, Bonn’s willingness in the 1950s to acknowledge Nazi-era crimes, coupled with the absence of denials among mainstream West Germans, reassured Germany’s World War II adversaries. Sorry States thus argues that a country's acknowledgment of past misdeeds is essential for promoting trust and reconciliation after war.
My book, shows, however, that many countries have been able to reconcile without much contrition at all. In the early years after the war, Bonn offered very little: although it offered a lukewarm apology and paid reparations to Israel, West German commemoration, education, and public discourse ignored the atrocities Germany had committed, and instead mourned German suffering during and after the war. Nevertheless, at this time West Germany and France concluded a stunning reconciliation. Bonn’s most famous gestures of contrition — wrenching apologies, candid history textbooks, and memorials to Germany’s victims (below left) — had not yet occurred. Many other World War II enemies (Japan and the United States; Britain and West Germany; the United States and West Germany; Italy, Austria, and their neighbors) reconciled despite little or no contrition.
Finally, Sorry States points out that contrition is highly controversial domestically, so can actually be counterproductive. As evident in Japan and elsewhere, expressions of contrition often prompt a backlash. Co 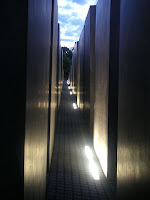 nservatives in particular are likely to offer a competing narrative that celebrates — rather than condemns — the country’s past and justifies or even denies its atrocities. Thus contrition can be counterproductive: foreign observers will be angered and alarmed by what the backlash suggests about the country’s intentions. The great irony is that well-meaning efforts to soothe relations between former enemies can actually inflame them. Remembrance that is less accusatory, conducted bilaterally or in multilateral settings, holds the most promise for international reconciliation.
I describe my argument further in "The Perils of Apology," published in the May/June 2009 issue of Foreign Affairs. For additional engaging and fascinating reading, I recommend Troubled Apologies Among Japan, South Korea, and the United States (2008), by one of my favorite 'Grrl scholars, Dr. Alexis Dudden, Associate Professor of History at the University of Connecticut.
(credit for top right photo of Yakusuni shrine; credit for bottom left photo of Berlin Holocaust Memorial)
by Jennifer Lind at 6:01 AM