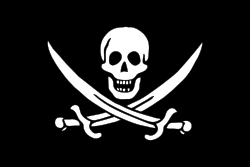 Rum and pirates. The image of the two is indelibly linked in our minds, and with good reason. Rum — or Kill Devil, as some not-so-fondly called it — was the drink of choice for pirates, sailors, and other “vagabonds” of the New World. It had the good fortune of being plentiful, cheap, and highly intoxicating. Indeed, the British Navy kept their sailors just this side of blindingly drunk by providing each man with a daily ration of “grog,” which consisted of a quart of water mixed with half a pint of rum, sugar and lime.
Life was difficult in the New World. Rum was a necessary ingredient for making the unpalatable more sweet. For the pirates, sailors and others who scoured the New World, Rum was even sweeter than money. Why take money when you could down a pint of Rum for your trouble? Thus, it was only a matter of time before the spirit became a medium of exchange.
But when Rum became a commodity capable of producing great wealth, bad things soon followed: Wars were fought over Rum; families were ripped apart because of Rum; and centuries of slavery and bondage in the Caribbean occurred because of Rum.
It is surprising how effectively the dark history of Rum has been covered over. Say the name, and 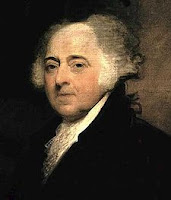 the images conjured up are of lazy, sun-filled days in the Caribbean and of tourists lying under umbrellas sipping mojitos. Yet this intoxicating brew was at least partially responsible for the American Revolution. No less an eminent figure than John Adams admitted as much: "I know not why we should blush to confess that molasses [the precursor to Rum] was an essential ingredient in American independence."
The colonists raged against the vestiges of the British mercantile system that forced them to import molasses exclusively from the British West Indies. The only problem was that Jamaica, Barbados, and the other Caribbean islands of the British Empire, could not produce enough molasses to satisfy the American thirst for Rum. That thirst was nearly insatiable. For example, in just one year, 1770, the white male population of the American colonies (less than 1.7 million) drank 7,517,000 gallons of Rum! The colonists simply ignored British law and sourced their molasses and Rum from islands throughout the Caribbean. Customs and trade officials were bribed to turn the other away while monumental amounts of Rum traversed The Americas. But when the British decided to enforce the law in order to increase their revenues to fight the Spanish, all hell broke loose. Americans loved their Rum, and they were willing to go to war over it!
Perhaps it is easy for Americans to forget their Rum history because we have no permanent markers to commemorate it. Not so in the Caribbean. While driving around in the numerous over-priced Rum tours organized by the cruise ship, I couldn't help but notice these beautiful brick buildings dotting the Caribbean landscape. The stood out against the 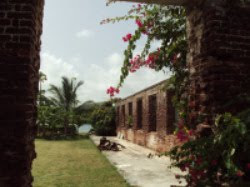 gaily-painted cement and wooden structures typical of Caribbean architecture. I soon discovered the brick buildings had a special story to tell, one that is intimately connected with Rum. It turns out that en route to the Caribbean, the British used the bricks as ballast in order to balance out their ships weighted down with slaves and other necessities. But once the ships arrived in the Caribbean, the bricks were no longer needed. They were discarded in favor of Rum.
Ever resourceful, Caribbean men and women used the bricks to create structures of great beauty.

*pic is of a fort in Antigua

by Marjorie Florestal at 7:45 AM