Sugar and Spice in Sports 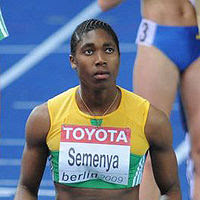 According to this week's New York Times, the International Association of Athletics Federations, which governs international track and field events, is investigating the eligibility of runner Caster Semenya (left) of South Africa. The IAAF plans to conduct sex-determination testing to confirm her eligibility after concerns were raised during a track and field competition in Berlin. Barry Bearak is the author of the Times piece; he describes Semenya as a "muscular, husky-voiced 18-year-old."
This is a troubling case.
It troubles me that we still expect female athletes to be feminine in their athleticism. Perhaps Semenya would not have been the target of an investigation had she been less muscular, although she might not have handily won the 800-meter race in Berlin with a more petite, more feminine, and less muscular

frame. As IntLawGrrls posted during last year's Olympic Games, we are markedly more comfortable with the sport of beach volleyball (right), in which women compete in bikinis, and in which we may easily assess both their sexuality and their athletic skills. (I still remember the collective public angst when American Olympian Kerri Walsh lost her wedding ring in the sand during a 2008 beach volleyball match).
In her NYT article about the IAAF investigation of Semenya, Alice Dreger observes that

sex is so messy that ... science can and will inform [the I.A.A.F.'s] decision, but they are going to have to decide which of the dozens of characteristics of sex matter to them.

Dreger concludes that the IAAF decision will be one based on sport, such as the number of "points awarded for a touchdown," rather than "natural" sex. After all, rigid, naturalized notions of sex and gender do not reflect the experience of many people whose sex and gender are located along a continuum of masculinity and femininity. (One such athlete was Stella Walsh Olsen, on whom IntLawGrrls posted a while back.)
Although many of the early IAAF sex-based eligibility investigations focused on women from the former Soviet Union, Semenya's case involves not only stereotypes of gendered behavior but also implicates issues of race. The sexuality of African women has long been the subject of voyeuristic colonialist study and speculation. Bearak's article notes the comparison to a woman on whom IntLawGrrls has posted: Saartjie Baartman, or Sawtche, the so-called Hottentot Venus, who was

'taken to Europe in the early 19th century and exhibited like a wild beast....'

The colonial fascination with African women's sexuality is well-documented by Anne McClintock in her book Imperial Leather: Race, Gender, and Sexuality in the Colonial Contest (1995), in which she describes how the African woman "became the prototype of the Victorian invention of primitive atavism." The international perception of Semenya's femininity, or lack thereof, reflects a similar postcolonial racial bias.
If the IAAF has its way, genetic testing will determine Semenya's precise chromosomal constitution. Unfortunately, the results will not encourage us to question our own assumptions either about gender and race or about the ways such stereotypes affect female athletes all over the world.