The Crime of Aggression: United States, wherefore art thou?

Crimes against the peace (the crime of aggression in today’s lexicon) was the centerpiece of the Nuremberg Trial, which was to be the “trial to end all wars.” Indeed, the Nuremberg Judgment reasoned that aggressive war was the proximate cause of the other crimes within the jurisdiction of the Nuremberg Tribunal—war crimes and crimes against humanity. Notwithstanding its prominence in the postwar period, the crime of aggression all but disappeared in the pantheon of international criminal law after WWII. Instead, the postwar architects of the United Nations enshrined a prohibition on the use of force directed at states in the U.N. Charter. Article 2(4) of the Charter reads:

All Members shall refrain in their international relations from the threat or use of force against the territorial integrity or political independence of any state, or in any other manner inconsistent with the Purposes of the United Nations.

None of the post-Cold War international tribunals included the crime of aggression within its subject matter jurisdiction, even though the crime was arguably relevant to the Yugoslavian, Sierra Leonean, and East Timorese contexts, at a minimum. 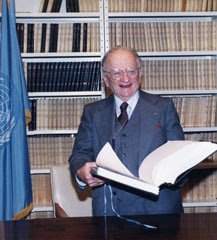 Reports of the death of the crime of aggression proved premature, however. As the ICC Statute gradually took shape during the 1990s, many smaller states—with the backing of former Nuremberg-era prosecutors such as Ben Ferencz (left) and the late Henry King (below right on the right with Nuremberg defendant Albert Speer)—insisted that the crime of aggression be revived. Negotiations on the precise contours of the crime proved contentious, however, and during the waning hours of the 1998 Rome Conference, delegates effectively punted. Article 5(2) of the Statute currently contains a placeholder indicating that Court will exercise jurisdiction over the crime of aggression once a definition is achieved:

The Court shall exercise jurisdiction over the crime of aggression once a provision is adopted in accordance with articles 121 and 123 defining the crime and setting out the conditions under which the Court shall exercise jurisdiction with respect to this crime. Such a provision shall be consistent with the relevant provisions of the Charter of the United Nations. 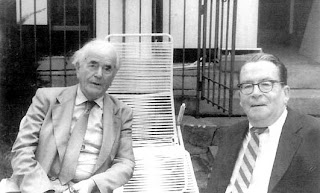 disbanded) dedicated to the crime and a number of informal sessions with states, NGOs, and academics. It is expected that a definition of the crime, and its formal elements, will be adopted at the Review Conference to be held next summer in Uganda.

A decision has apparently yet to be made on whether the United States will participate in the remaining discussions on the crime of aggression. The final negotiation session of the Special Working Group on the Crime of Aggression was held in New York in January and February 2009—immediately after President Obama took office. The U.S. did not participate (the SWGCA is open to non-parties). Nor did it participate in either an informal retreat or an intersessional meeting held in April and July 2009. The U.S. will need to make a decision about its future participation soon, as the next negotiation 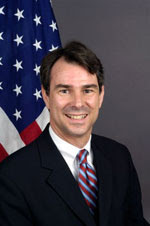 session involving the Assembly of State Parties is slated for November 18-26 in The Hague.

John Bellinger (right)—the Legal Advisor to the State Department under President George W. Bush—has cogently argued in a recent op-ed that the U.S. should be at the negotiation table going forward, even if the U.S. has no plans to join the Court in the immediate future. Bellinger is right; it is squarely within the United States’ interests to ensure that the ICC Statute contains a legitimate and appropriate definition of the crime of aggression given the crime's potentially critical impact on international affairs and the U.N. system of peace and security. In addition, the Security Council will play an important role in any prosecution for aggression; as a permanent member of the Council, the U.S. should ensure that the ICC Statute properly defines the relationship between the Court and the Council with respect to the ICC crime that most acutely implicates the Council’s bailiwick. Making constructive contributions to these negotiations will also enable the Obama Administration to signal a new, more engaged, relationship with the Court and its Assembly of States Parties.

Although many foundational issues have been resolved over the years, a number of open questions about the scope and contours of this crime remain subject to potential U.S. influence in advance of the 2010 Review Conference. The two primary outstanding issues with respect to the definition of aggression are
Subsequent posts will focus on the details of each of these issues.