Who said what on Gaza 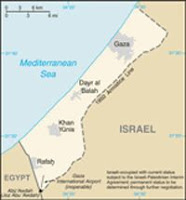 Figuring out who said what about Palestine in recent days proved yet another mainstream media scavenger hunt.
► Reuters wrote Friday that "a report by U.N. High Commissioner for Human Rights Navi Pillay lambasted the 'nearly total impunity' for the violations," then proceeded to list "Pillay's recommendations" respecting the issue.
► Christian Science Monitor reporter Ilene R. Prusher led Thursday with a Human Rights Watch report on Gaza, the area depicted in cream coloring at right. She then anticipated that "what are expected to be two critical United Nations reports." (map credit) Prusher continued:

Israel has refused to cooperate in the investigation that is expected to yield the harsher of the two reports. That investigation is headed by Judge Richard Goldstone, a former war-crimes prosecutor from South Africa who was appointed by the UN Human Rights Council in Geneva. Israel has criticized the council, which has a rotating membership that currently includes countries such as Saudi Arabia, Kyrgyzstan, and Angola, as biased and thus unfit to accurately assess its actions.
Israel has provided assistance, however, to investigators working on a second report, being conducted by the UN Commission on Human Rights.

Although the 1st paragraph makes sense, the 2d does not: as posted, the "UN Commission on Human Rights" disbanded in 2006 to make way for the "UN Human Rights Council." One guesses the 2d paragraph was intended to refer to the inquiry on which Reuters reported a day later. Yet this too appears a bit askew.
That's because the website of the Office of the U.N. High Commissioner for Human Rights attributes the Friday report not directly to Commissioner Pillay, but rather to the Special Committee to Investigate Israeli Practices Affecting the Human Rights of the Palestinian People and Other Arabs of the Occupied Territories. The U.N. General Assembly renewed the mandate of this 41-year-old Special Committee just last December, via Resolution A/RES/63/95. Its 3 current members -- representing Malaysia, Senegal, and Sri Lanka -- conducted a 10-day field mission to Egypt, Jordan, and Syria at the beginning of this month, and then concluded:

'Violations of the international humanitarian law during the operation Cast Lead, in particular the targeting of civilian population and wanton destruction of property and religious and cultural objects.'

The Special Committee will present its findings -- based on field mission interviews and expert reports from nongovernmental and governmental organizations -- to the U.N. General Assembly later this year.
Have gone this far in the scavenger hunt, but still not entirely sure who said what.
Reportorial precision would go a long way toward aiding comprehension of the workings of international legal institutions.