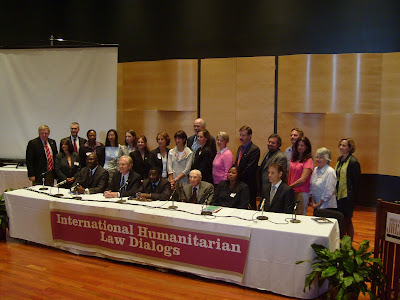 As readers will recall from this post, IntLawGrrls and the American Society of International Law were among the proud cosponsors of the Third Annual International Humanitarian Law Dialogs (above), held last week in Chautauqua, New York.
The IHL Dialogs provide the opportunity for international criminal prosecutors –- from as long ago as Nuremberg through the (all too many) present-day criminal tribunals –- to exchange ideas privately, to meet with other international humanitarian law scholars and practitioners, to recharge their batteries, and to share programs with the public. It is a small public, as the 135-year-old Chautauqua Institution, a lovely upstate community beside the lake of the same name, generously opens its doors to us sat the end of its nine-week season of lectures, concerts, classes, and recreation programs.
This year the theme was “Honoring Women in International Criminal Law: From Nuremberg to the ICC.” It is no exaggeration that this theme arose with IntLawGrrls founder Diane Marie Amann, who (diplomatically) blogged in 2007 about the absence of women prosecutors at the 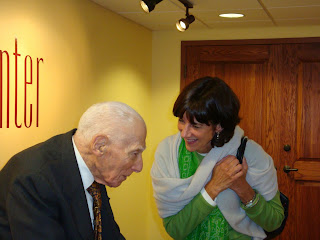 First International Humanitarian Law Dialogs. David Crane, the main force behind the Dialogs and the first prosecutor at the Special Court for Sierra Leone, replied at once with a comment. The choice of this year's theme indicates that he heard Diane loud and clear.
The Dialogs were preceded by a reception at the Robert H. Jackson Center in nearby Jamestown. Gracing this reception was onetime Nuremberg Prosecutor H.W. William Caming (above right, talking with me), who had not attended the first two Dialogs. He honored his fellow former Nuremberg prosecutor, Henry T. King Jr., who had spoken so movingly last year and passed away at age 89 this spring.
We IntLawGrrls – and our friends – were well represented:
► Diane gave a keynote lecture that arose out of her “Women at Nuremberg” blog series (below). She illustrated her talk with fascinating photographs, found painstakingly in archives, as well as personal history about the women, found even more painstakingly. (Be sure to read the text, in the Proceedings to be published by ASIL.) 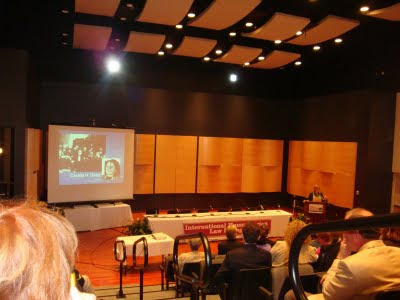 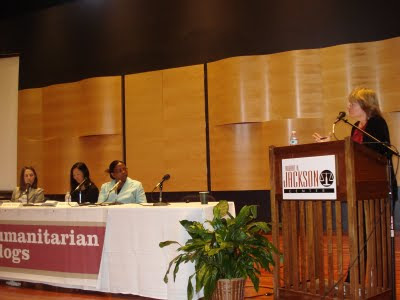 ► Other keynoters were Minnesota State Judge Marilyn J. Kaman, who served as an international judge for the U.N. Mission in Kosovo; John Q. Barrett, who spoke about Katherine B. Fite, the (perhaps) leading woman lawyer at Nuremberg; and Eli Rosenbaum of the Justice Department’s Office of Special Investigations.
The panels and talks went hand-in-hand with opportunities for the prosecutors, IntLawGrrls, ASIL membersm and others to chat over a meal, on a walk, or while rocking on the front porch of the century-old Athaeneum Hotel.
As a sponsor, IntLawGrrls thanks all the other sponsors and organizers, especially Professor Crane, the Syracuse University College of Law, and Impunity Watch; Greg Peterson, Chair of the Jackson Center, and his family; Adam Bratton, Executive Director of the Jackson Center; Carol Drake, who makes everything run at the Jackson Center; Professor Sadat and Washington University's Whitney R. Harris World Law Institute; and Professor Michael Scharf and Case Western's Frederick K. Cox International Law Center, and organizer of the glorious post-conference cruise on Lake Chautauqua.
by Lucy Reed at 6:08 AM

Dear Lucy,
Thanks for these excellent posts. But I must say that kudos are due to others as well for this topic -- David Crane of course, but also Leila Sadat, who raised this issue while attending the 1st Dialogs in 2007.
Best
Diane

And I have also heard since posting that Betsy Andersen had chimed in during a conference call in support of the theme. Good to have so many thinking alike, and getting there.