Arrests and Convictions of Rights Violators in Latin America: Justice Delayed but Not Denied

Simultaneous advances in the prosecution of grave international crimes by national courts took place in Guatemala and Chile yesterday.

Chile
In Chile, Investigating Judge Victor Montiglio issued arrests warrants for 129 former associates of the secret police (DINA) during the Pinochet years. The warrants involve members of all three branches of the military as well as the police, accused of working with the DINA to forcibly disappear suspected opponents of the government of General Augusto Pinochet during the 1970s. The cases on which the warrants are based include the forced disappearance of top leaders of the Communist Party, the killing of members of the Movement of the Revolutionary Left, which at the time was portrayed as a result of internecine war within the left, and killings and disappearances as a result of Operation Condor, the South America-wide coordinated effort by the military regimes (with U.S. backing) to rid themselves of leftist activists. The judge indicated that he is pursuing anyone who was involved in the crimes, not just those “most responsible.”
A few interesting issues raised by the warrants:
► First, technically, Chile still has an amnesty law in place, and the center-left governments that succeeded Pinochet have been unable to overturn or “interpret” the law legislatively despite a clear decision by the Inter-American Court of Human Rights, in Caso Almonacid Arellano y otros v. Chile (2006), that the government must do so. Rather, the judiciary has itself interpreted the amnesty law so that it does not apply in cases involving either forced disappearances or other international crimes. The amnesty has not stopped indictments, trials and convictions (nor has the statute of limitations on the crimes, which has been held not to apply to either continuing crimes or crimes against humanity). Rather, Chile's Supreme Court, in a number of cases starting last year, has allowed convictions but then reduced the sentence greatly as a result of a procedural device called “half prescription.” Under this device, because the cases have taken so long to go forward, the defendant gets the applicable sentence reduced, and the aggravating factors that would otherwise increase the sentence do not apply. In a number of cases, convictions for the disappearance of sizable numbers of people have led to 3-to-7-year sentences: any sentence less than 5 years can be served on parole. This has led to an interesting debate in :
► Is it better to convict but not punish the former security forces (most now quite elderly), or is that yet another affront to the victims?
This debate is sure to recur as the current crop of cases comes to trial.

Guatemala
In Guatemala yesterday, a trial court convicted Felipe Cusanero of 6 counts of enforced disappearance in the early 1980s. Cusanero was a military commissioner (local army representative) from Chimaltenango province outside the capital. He was sentenced to 25 years in prison for each count. The victims were Mayans from the of , and the disappearances were part of an estimated 200,000 deaths and 40,000 disappearances that took place from 1960 to 1996 in . This is the first time a local court has convicted a military participant in the massacres that took place in the early 1980s, and the first time the Public Prosecutors’ office has successfully led a prosecution of crimes from that era. The three judges ruled that to condemn the accused on grounds of forced disappearance did not violate the prohibition on ex post facto law, since the underlying acts have long been criminal in both national and international law. The case was closely watched in the Guatemalan courts as a possible small break in the almost-total impunity that now exists for those who ordered and participated in massacres and widespread and systematic disappearances and torture during the “internal armed conflict” period. The judges -- Walter Paulino Jiménez Tixaj, Alba Delia Moscoso Linares y Neslie Guisela Cárdenas Bautista – showed tremendous courage in their verdict, given 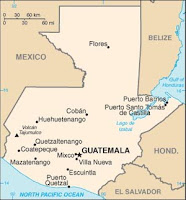 threats against them, and against any judge who dares hear witnesses or evidence about genocide or crimes against humanity in .

So ... a good day for the fight against impunity for international crimes in the . Eric Holder, are you listening?