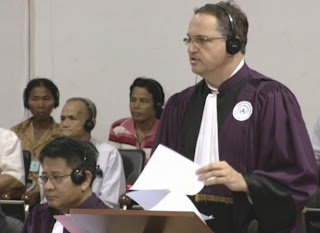 We've blogged before on the controversy at the Extraordinary Chambers in the Courts of Cambodia between the two Co-Prosecutors over whether to charge additional suspects with international crimes committed during the Khmer Rouge era (see here and here). Following a recent ruling of the Pre-Trial Chamber, which failed to achieve a majority to block further investigations, the Acting International Co-Prosecutor, William Smith (right), has now filed with the Co-Investigating judges two new Introductory Submissions.
Introductory Submissions are confidential to protect the integrity of the investigation, the identity of the victims and witnesses, and the presumption of innocence of the suspects. The Internal Rules do, however, allow the Co-Prosecutors to provide the public with a short summary of their submissions. What we've learned is that the Co-Prosecutors have recommended the investigation and prosecution of five additional suspects for 40 distinct factual situations of murder, torture, unlawful detention, forced labour, and persecution. The Second Introductory Submission contains allegations that, if proved, would constitute crimes against humanity, grave breaches of the Geneva Conventions, and violations of the 1956 Cambodian Penal Code. The Third Submission contains genocide allegations, but no war crimes allegations. (See our prior post on finding genocide in Cambodia).
These new Submissions specifically reference the theory of joint criminal enterprise (JCE), no doubt in an effort to ensure that the Closing Order (indictment) includes this form of responsibility. As we've blogged before, the Duch Closing Order does not include JCE allegations; the investigation into Duch's criminal liability did not focus on potential JCE liability, because the Co-Prosecutors failed to specifically reference JCE liability in their Submission to the Co-Investigating Judges. An appeal by the Co-Prosecutors on this point failed.
The Acting International Co-Prosecutor has indicated that he has no plans to conduct any further preliminary investigations into additional suspects at the ECCC. 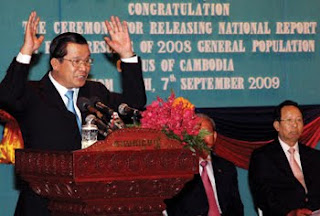 Cambodian Prime Minister Hun Sen (left) is not happy. He has consistently argued against any expansion of the ECCC's investigations beyond the five suspects already in custody on the ground that it would spark civil unrest. At a forum on the release of new census figures, Hun Sen is quoted as saying:

If you want a tribunal, but you don't want to consider peace and reconciliation and war breaks out again, killing 200,000 or 300,000 people, who will be responsible?

Hun Sen's repeated involvement in this issue has given rise to concerns among human rights groups that the executive branch is attempting to interfere with the work of the Extraordinary Chambers.