Nobel Peace Laureate.
Presidental Medal of Freedom winner.
Congressional Gold Medal winner.
National Medal of Science winner.
Father of the Green Revolution.
Creator of the World Food Prize.
The life of Dr. Norman Borlaug (left), who died this weekend at age 95, lent itself to superlatives. Depending on whom you ask, he is either the man who saved a billion lives or the man who unleashed the violence of unsustainable agriculture on the developing world.
Neither caricature does justice to this complex and brilliant man.
Borlaug was an agronomist and microbiologist. His primary claim to fame was his work developing 'the 'semi-dwarf'' plant variety -- plants that had a shorter, more compact stalk that could support a larger head of grain without falling over from the weight. The varieties he developed doubled, and sometimes quadrupled yields. Hence, the "father of the green revolution" moniker.
It is hard to imagine what kind of world we would have today without Borlaug’s pioneering work. Borlaug's high-yielding v

arieties or their progeny are currently grown on 200 million acres worldwide. Without them, food production might well have lagged far behind a burgeoning global population. (photo credit: the World Food Prize)
To be clear, his work did not usher in a utopia of food security. The problem of inequitable distribution remains as daunting as it ever was. Nevertheless, the Nobel Committee was surely justified when it declared:

'More than any other single person of this age, he has helped provide bread for a hungry world.'

Borlaug’s disease-resistant varieties helped Mexico become self-sufficient in grain. His varieties were then exported to In 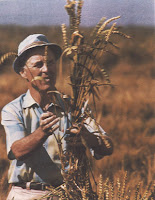 dia and Pakistan, where yields doubled. The technology spread to Africa (where it had significantly less success), to the Middle East, and to Latin America. In the process Borlaug built the International Maize and Wheat Improvement Centre, (CIMMYT) into one of the world’s most important research centers. Now almost 50 years old, CIMMYT remains a key international agricultural research and training institute under the auspices of the Consultative Group on International Agricultural Research . (photo credit: The Borlaug Institute)
The fairy-tale version of the Green Revolution and of Dr. Borlaug’s work ends here, with the good doctor riding off with his well-deserved 1970 Nobel Peace Prize.
Unfortunately, not everyone lived happily ever after.
The newly developed higher-yielding varieties required tremendous fertilizer and pesticide inputs, and these generated dramatic social and environmental consequences. Fifty years later, we are still coping with that part of Borlaug’s legacy. Overuse of fertilizer has created vast dead zones in aquatic ecosystems. Pesticides routinely poison land, water and people. And, because poorer farmers could not afford the critical inputs, the spread of high-yielding varieties pushed the most marginal of farmers into an even more precarious situation. Borlaug typically dismissed these critiques as the murmurings of the "elite." In his later years, he was a passionate advocate for "the gene revolution," which he saw as the natural successor to the Green Revolution.
Perhaps Dr. Borlaug's death might be a moment for bridging divide in the agricultural world over how best to end hunger. Instead, surely we can all agree that Dr. Borlaug was right when he said:

'[T]he first essential component for social justice is adequate food for all mankind.'

by Rebecca Bratspies at 6:05 AM