Go On! Women, peacebuilding & the rule of law

(Go On! is an occasional item on symposia of interest) On behalf of WILIG, the Women in International Law Interest Group of the American Society of International Law, we are delighted to announce the following program: "Women, Peacebuilding, and Advancing the Rule of Law," to be held 6:30-8:30 p.m. on September 30, 2009, at Tillar House, ASIL's headquarters, at 2223 Massachusetts Avenue, N.W., Washington, D.C.
Cosponsors along with WILIG are ASIL's Transitional Justice and Rule of Law Interest Group, Vital Voices, the American Bar Association's International Law Section, Africa Committee and the Women's Interest Network, the Institute for Inclusive Security, and Women in International Security. 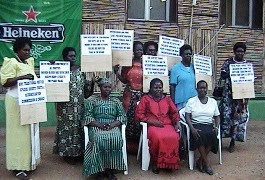 Women are an important part of the peacebuilding equation. Too often they are excluded or marginalized in the peace process. Limiting or excluding women from the peacebuilding process in a meaningful way not only leaves a critical resource untapped, but hinders a society's recovery. Women can be agents of change, advocates for justice and peace, and leaders in reestablishing rule of law. (credit for 2008 photo by I. Vuni of women at Uganda peace talks in Juba, Sudan)
Program Chair and Moderator is Melanne A. Civic, Senior Rule of Law Advisor at the U.S. Secretary of State's Office of the Coordinator for Reconstruction and Stabilization, who is on detail to the Center for Complex Operations, National Defense University.
The panelists, who will discuss the critical role of women in peacebuilding as well as comment on the July 2009 Report of the Secretary-General pursuant to U.N. Security Council Resolution 1820 (2008), "Women and Peace and Security," are:
►Melanne Verveer, the Ambassador-at-Large for Global Women's Issues, who is also the cofounder and former CEO of Vital Voices;
►Swanee Hunt, who served as U.S. Ambassador to Austria between 1993 and 1997 and now is Chair of the Institute for Inclusive Security (formerly Women Waging Peace); and
►Fionnuala Ní Aoláin, Professor of Law at the University of Minnesota Law School and Director of the Transitional Justice Institute at the University of Ulster in the North of Ireland.
Details and registration here.