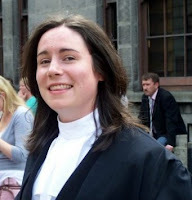 It's IntLawGrrls' great pleasure to welcome Máiréad Enright (right) as today's guest blogger.
Máiréad is a Ph.D. Candidate in Law and the EJ Phelan Fellow in International Law, 2008-2010, at University College Cork, Ireland. She's completing a thesis on the reception of Muslim divorce law in secular legal systems. Her guest post below discusses British law and culture with respect to forced marriage and arranged transnational marriage.
Her work at Cork forms part of a 3-year thematic research project on Gender, Multiculturalism and the Law in Ireland, directed by her supervisor, Dr. Siobhán Mullally, Senior Lecturer and Co-Director Centre for Criminal Justice and Human Rights at University College Cork. Funding the project is the Irish Research Council in the Humanities and Social Sciences.
Called to the Irish Bar in 2006, Máiréad was awarded a visiting fellowship to the Feminism and Legal Theory Project at Emory Law School in Atlanta, Georgia, in Spring 2009 and a visiting fellowship to Osgoode Hall Law School, York University, Toronto, Canada, in Summer 2009, and next month will be a visitor at Queen Mary, University of London, England.
Máiréad dedicates her contribution to the Irish poet Eibhlín Dhubh Ní Chonaill, of whom she writes: 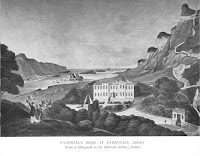 Eibhlín was born in 1743 in Derrynane, at left, in my county of Kerry, to a wealthy family with a tradition of producing women poets. She is best known as the author of the famous poem, Caoineadh Airt Ui Laoghaire, a 'keen,' or lament, for her dead husband. Eibhlín's husband Art was killed by a local magistrate who had offered to buy the Catholic noble's racehorse for an insultingly low price. When Art refused, thus flouting the Penal Laws designed to limit Catholics' civil and political rights and undermine their culture, he was murdered. He left behind his pregnant wife and two small sons. His murderers were never punished.
In choosing to commemorate Eibhlín Dhubh Ní Chonaill, I wanted to think about the many women harmed by colonisation and by the brutal law that inevitably accompanies it, and about the damaging echoes of colonisation which persist in countries, such as Ireland, that have gained their

independence. In 1829, Eibhlín's nephew, the barrister Daniel O'Connell, finally secured Catholic Emancipation: for this achievement he is remembered as 'The Liberator'. O'Connell's statue, at right, is on Dublin's main street, which is named after him. There is no surviving picture of his aunt.

Today Ní Chonaill joins other transnational foremothers in IntLawGrrls' list below the "visiting from..." map at right.
Heartfelt welcome!
by Diane Marie Amann at 6:05 AM