We at IntLawGrrls are honored to welcome the Honorable Marilyn J. Kaman (right), Judge of the Hennepin County District Court, Minneapolis, Minnesota. As today's guest blogger, she contributes a post drawn from her recent presentation at the 3d Annual International Humanitarian Law Dialogs in Chautauqua, New York, an event for which, as we've posted, IntLawGrrls was a proud cosponsor.
Marilyn holds a bachelor's degree cum laude from Vanderbilt University, a certificate of proficiency in Russian from Leningrad State University, and a master's degree in teaching from the University of Chicago. After earning her J.D. cum laude from the University of Wisconsin, where she served on the Wisconsin Law Review, she practiced at the firm of Dorsey & Whitney, taught as an adjunct at William Mitchell College of Law in St. Paul, and was an Assistant Hennepin County Public Defender. A judge in that county since 1990, serving in many judicial divisions, she's been Presiding Judge of the Probate/Mental Health Court since 2007. Marilyn's also sat on appeals panels by appointment of the Minnesota Supreme Court.
Her awards are numerous; for example, she was a co-recipient of the Minnesota Trial Judge of the Year-2004, given by the Minnesota Board of Trial Advocates, and the 1995 Marvelous Minnesota Woman Award by then-Governor Arne Carlson.
She's also active in numerous professional organizations, among them: Publications Officer for the Section of International Law of the American Bar Association and past C0-Chair of 2 ABA committees, on United Nations International Institutions and on International Criminal Law.
Those last positions point to the topic of Marilyn's post: her experience while on leave from 2002-2003, having been chosen by the United Nations to serve as an international judge in Kosovo, then a province of Serbia under U.N. administration. As she discusses in her guest post below, her duties included hearing cases alleging war crimes, organized crime, ethnically motivated disputes, and trafficking of human beings. (Her complete presentation is forthcoming in ASIL-published Proceedings, as with those of the 1st Dialogs, available here.) 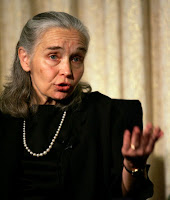 Marilyn dedicates her post to Dr. Alison Des Forges (left), the human rights investigator who died in February, at age 66, in a plane crash outside Buffalo, New York. (photo credit) Des Forges, as posted, was the subject of a moving tribute by American Society of International Law Executive Director Elizabeth Andersen at this year's IHL Dialogs. Our own post soon after Des Forges' passing detailed the essential role that Des Forges played in Prosecutor v. Akayesu (1998), in her capacity as an expert witness and historian who worked as a Senior Advisor for the Africa Division of Human Rights Watch. In addition to her contribution to that 1st trial before the International Criminal Tribunal for Rwanda, we noted,

Des Forges also gave expert testimony in national courts, the United Nations, the Organization of African Unity, and the national legislatures of Belgium, France, and the United States. She published Leave None to Tell the Story: Genocide in Rwanda the year after the Akayesu judgment, and also won a MacArthur Foundation Fellowship for her work as, to use MacArthur words, a 'Human Rights Leader.'

Today Des Forges joins other transnational foremothers in IntLawGrrls' honor roll just below our "visiting from ..." map at right.
Heartfelt welcome!
by Diane Marie Amann at 6:04 AM