When NATO’s 1999 intervention in Kosovo ended with the United Nations assuming interim civilian administration in that province of Serbia, my only understanding of the events was intellectual, gleaned from reading the morning newspaper before I began my day as a judge in Minnesota. Yet three years later, I found myself on a plane bound for Kosovo to help rebuild a destroyed justice system. 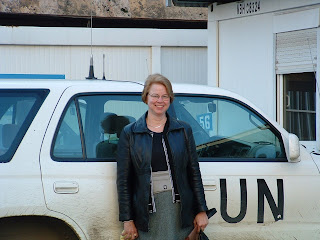 On arrival (left), I was posted to a city called Peć/Peja. Or is it Peja/Peć? These are two names, one Serbian and one Albanian, and the order in which you say them supposedly signifies a bias or preference.
It would be difficult being an impartial international judge in Kosovo, where every move was scrutinized.
The foundation for my work was laid by another woman, in the aftermath of another war. The woman was Eleanor Roosevelt, who played an instrumental role in drafting the 1948 Universal Declaration of Human Rights. It is worth noting that although the U.N. General Assembly voted unanimously in favor, certain countries abstained, taking exception with UDHR’s guarantee of freedom in marriage. I would encounter the force of that exception a half-century later.
I took part in “internationalized justice”: in contrast with ad hoc bodies such as the International Criminal Tribunal for the former Yugoslavia, we international judges sat in Kosovo’s domestic courts alongside local judges, in the hope of bringing a measure of impartiality to the outcome.
The stories of two women tell much about my experience in Kosovo.
Almost immediately upon arrival in Pec/Peja, I came to know the 1st woman, Haxjere Sahiti.
She had been married on Sunday and murdered on Monday. The 20-year-old Kosovar Albanian woman died from seven gunshots, in her family’s living room. The killer was her brother; the murder was witnessed by her mother and brother.
Her crime was supposedly not being a virgin.
Under traditional Albanian cultural code, a bride may be returned to her family if she “is not as she should be” on her wedding night – or the groom may kill her, with a bullet traditionally given him by the bride’s father.
Upon exhumation of Haxjere’s body, it was determined that she had been a virgin, after all.
The international police, with whom I worked, investigated this crime and tried to find the killer. But no one wanted to give information. To talk to police or the courts would violate notions of maintaining family “honor.” To do so would mean that the potential witness (or their family) would “pay” – with their lives – for the information given. Haxjere’s family professed to know nothing.
As an international judge in Kosovo, I was asked to sit on politically sensitive cases – of war crimes, crimes against humanity, ethnically motivated disputes, trafficking in drugs and human beings, genocide. I also acted as an investigative judge – more akin to a prosecutor in the United States – and determined whether sufficient evidence existed to charge someone with a crime. I faced many unconventional obstacles that necessarily exist in a mission environment. With Haxjere Sahiti’s case, I confronted an obstacle new to me – that cultural norms dictate both what a “permissible honor killing” is and the silencing of witnesses.
Yet another obstacle in the case of the 2d woman, Sabahate Tolaj.
Sabahate was 35 years old. She was not married and had no c 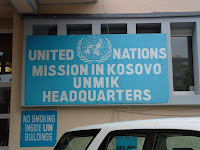 hildren, and had completed the Aviation School in Sarajevo. During the 1999 war in Kosovo, she had been a member of the Kosovo Liberation Army. Under UNMIK, the United Nations' Mission in Kosovo, Sabahate was a Kosovo Police Service officer in Peja, investigating high-profile murders and referring the investigations to international judges like me. Sabahate and I had numerous conversations and we felt a particular kinship with one another.
One day I asked about her safety. You see, I had bodyguards, and she did not. Sabahate just shrugged and said:

On November 24, 2003, at 7:45 in the morning, a “drive-by” assassination took place. Sabahate and another officer were killed; the third survived his wounds. After nearly four years of investigations and court hearings – justice comes slowly – the convictions were read out in Peja District Court. Bedri Krasniqi was sentenced to twenty-seven years for double murder; the other accused were acquitted for insufficient evidence.
Sabahate was killed only a couple of months after I returned home. My sadness over her death is still present.
An all-too-familiar postscript: Double murderer escapes Kosovo prison, wire services reported on December 1, 2008, adding, “nine member of the correctional services were held on suspicion that they helped” Sabahate’s killer get away.
My time as an international judge in Kosovo has had a profound impact upon me. In answer to the question often asked of me, here are some of the things I learned:
► To be by myself. In an apartment without reliable heat and electricity, one has time to think.
► How much I cherish my family and friends, at home and in Kosovo. (If you see my husband, tap him on the shoulder and say, “I think she is grateful for all the support you gave her.”) 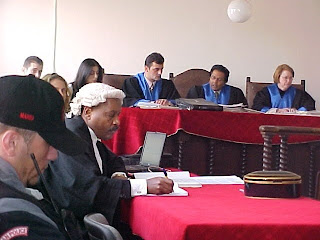 ► International law. If murder was a familiar legal concept to me, war crimes and crimes against humanity were not. Now I am passionate about learning this new body of law.
► Cultural norms can find their way into the courtroom, and have an impact upon guilt or innocence.
► Not everyone wants to reestablish the rule of law. Some will kill innocent police officers toward their end.
► Rendering verdicts was important, but inculcating a belief in the rule of law was more abiding than any one verdict I rendered.
► Each one of us can do our part in advancing the cause of international justice for women, and children and men, and in bringing to life the values of the Universal Declaration of Human Rights.
by Marilyn J. Kaman at 6:02 AM